PETALING JAYA (THE STAR/ASIA NEWS NETWORK) - You could call them the men facing the heat. Fireman battling peat fires, caused by open burning in many parts of the peninsula, are the ones suffering the most from these irresponsible acts.

Sungai Pinang fire station chief Zaidi Aatan, whose men have just wrapped up a 10-day round-the-clock firefight at an illegal dump in Kapar, Klang, knows the suffering of his men.

For more than a week, officers were forced to work in conditions where toxic fumes were spewing from burning rubbish stretching the length and size of eight football fields. 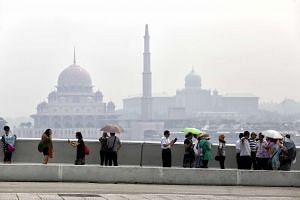 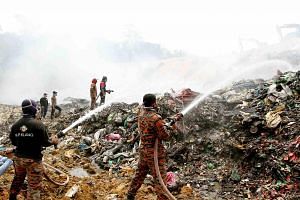 Though none had reported breathing difficulties, the fire station chief said he and his men had developed skin rashes.

"Even after I bathe, my wife would tell me that I still smell of rubbish. This is how it is in our job," he said.

"We work in shifts but we have to be here every day to douse peat soil fire. With the help of the rain, we may be able to put everything out by next week," he said.

The fire, which has razed the forest reserve the size of 43 football fields, was started by farmers who wanted to clear land illegally for their plantations.

Officers here have managed to halve the size of the fire, but said there were still 10.5 ha of land still burning.

Fire and Rescue Department deputy director-general (operations) Datuk Soiman Jahid was upset at the people who continued to be irresponsible.

"I have been here for 30 years and we have always done awareness campaigns and told people not burn rubbish or their farms during the dry season. But they still do it.

"It's really the attitude of the people. They want to clear their farms or get rid of rubbish in the easiest and cheapest way. So they do open burning.

"And when it goes out of control, it becomes our job to stop it," he said. "If they really must conduct open burning, they should do it near a water source so they can put out the fire if it becomes too big."

Mr Soiman said with the prolonged dry weather, officers might find themselves stretched thin as they must also attend to fires in buildings, residential areas and other rescue cases.

He said priority had to be given to cases where human lives were in danger.

"However, ignoring uncontrolled open burning cases may lead to larger fires that pollute more," he said

Mr Soiman said it remained to be seen if such new laws would help.