The Ministry of Finance (MOF) owns 1Malaysia Development Berhad (1MDB) but has no knowledge of its operations because it has no representative on the board of directors. 1MDB's board of advisers has never met and its advice has never been sought.

Top MOF officials revealed this to the Public Accounts Committee (PAC), whose report of its investigation into the troubled 1MDB was tabled in Parliament last week. Transcripts of the PAC hearings were uploaded online yesterday.

"Operations-wise, we do not know... Everything we read in the newspapers," the ministry's secretary-general Mohd Irwan Serigar Abdullah told the PAC, according to the transcript dated May 19 last year.

Similarly, MOF deputy secretary-general (investment) Mohamad Isa Hussain told the bipartisan committee that 1MDB had never referred to MOF or the Minister of Finance Incorporated (MFI) regarding its strategy, investment decisions and financing until its debt rationalisation plan.

MFI is a corporate body set up under MOF to oversee the ministry's investments and its subsidiaries.

Datuk Mohamed Isa said he had never received periodic reports or notice of annual general meetings from 1MDB, which is a requirement for MOF subsidiaries.

He also said that 1MDB, which is required to refer "all decisions on substantial investment and establishment of subsidiaries" to MFI, was able to bypass the ministry because of Article 117, which gives the prime minister ultimate authority.

Asked by PAC members if this irregularity was highlighted to 1MDB, he claimed MOF had written to Tan Sri Lodin on March 28, 2012, to spell out the practices of MFI subsidiaries. "However, there was non- compliance," he said.

Mr Irwan also said his predecessor had written to ask 1MDB to do due diligence, but was ignored. His deputy Mat Noor Nawi's letter asking Mr Lodin for information also received no response.

Mr Irwan, who sits on 1MDB's eight-member advisory board which Prime Minister Najib Razak chairs, revealed that it had never met and its advice never been sought by 1MDB. Auditing firm KPMG's representative Khaw Hock Hoe said his firm had never seen any minutes of meetings.

"(The revelations) will strengthen the perception that he (Mr Najib) is guilty. Even if Najib was not directly involved, he should take responsibility because 1MDB was under his watch," said Associate Professor Mohd Faisal Syam from Universiti Kebangsaan Malaysia. 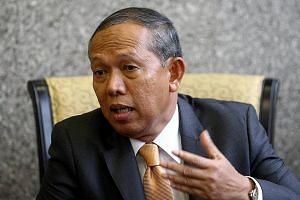 No evidence of wrongdoing by Najib: PAC chief

"Did they (the PAC) ever ask Bank Negara officials to attend their hearings? No. Did they call the Prime Minister himself? No.

"How can anyone expect the truth to be known if the man who is the sole shareholder, sole signatory, Finance Minister and Prime Minister all at the same time, doesn't say anything about what happened in 1MDB?" he wrote in a blog.

Former prime minister Mahathir Mohamad has called for "foreign interference" to oust Mr Najib in an interview with The Weekend Australian. His call comes amid foreign investigations into alleged financial mismanagement at 1MDB.