In her first formal policy pledge since her government took office in the former junta-run nation last week, Ms Suu Kyi said on Thursday she would prioritise releasing activists - an issue laden with significance for herself and scores of MPs in her party once jailed for democracy activism.

More than a hundred prisoners of conscience and students remain locked up in Myanmar, despite reforms in recent years as the military loosened its grip on power after half a century of repressive junta rule. 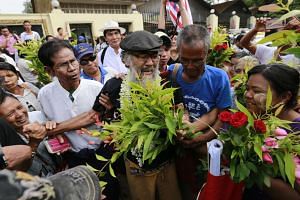 On Friday morning, families gathered at prisons in Yangon, the largest city, and in central Tharrawaddy, where students have been detained for more than a year over an education protest that was crushed in a violent police crackdown in March 2015.

Expectant families clutching bunches of flowers also greeted the students as they arrived by a police truck at a nearby courthouse, where officials said they were already preparing to free the students.

"I have instructed my staff to enable (their release) as soon as the prosecutor asks to withdraw the case. Our side is ready to proceed," Mr Kyaw Swar Nyein, district judge in Tharrawady told AFP.

"Our staff will be happier if the students are freed," he added.

Thirty-seven student activists are detained on a mix of charges, including unlawful assembly and rioting.

Another 45 are on bail but facing similar charges.

"I am very excited. I will only believe it when my friends are really released," said 23-year-old student Shwe Kyal Moe, who was injured in the crackdown but released on bail last year after serving four months in jail.

The routine jailing of dissidents was one of the former junta's most egregious acts, stirring international outcry and support for Ms Suu Kyi's pro-democracy movement.

Ms Suu Kyi herself spent about 15 years under house arrest and more than 100 current National League for Democracy lawmakers served time in the country's notorious prisons.

While the quasi-civilian government that replaced the junta in 2011 freed hundreds of political detainees, it also oversaw the detention of scores more, particularly those involved in land and education protests.

According to the Assistance Association for Political Prisoners there are some 121 political prisoners held in Myanmar's jails, while a further 414 are believed to be awaiting trial.

The majority were arrested before last November's landmark elections, which Ms Suu Kyi's National League for Democracy won in a landslide.

Ms Suu Kyi, who made the prisoner release announcement in her broadly defined new position of state counsellor, did not give a clear timeline.