NEW YORK (BLOOMBERG) - Years before Goldman Sachs Group Inc arranged bond deals now at the heart of globe-spanning corruption probes, the firm's then CEO Lloyd Blankfein personally helped forge ties with Malaysia and its new sovereign wealth fund, according to people with knowledge of the matter.

Mr Blankfein was the unidentified high-ranking Goldman Sachs executive referenced in US court documents who attended a 2009 meeting with the former Malaysian prime minister, the people said. The meeting was arranged with the help of men who are now tied to the subsequent plundering of state fund 1Malaysia Development Berhad (1MDB), according to US court documents unsealed last week.

The meeting at the Four Seasons hotel in New York was set up and attended by two key figures in the 1MDB scandal, Malaysian businessman Jho Low and former Goldman partner Tim Leissner, one person with direct knowledge of the matter said, asking not to be identified as the information isn't public.

The high-level gathering laid the groundwork for a relationship that would prove profitable for the investment bank. Since then, the use of US$6.5 billion (S$9 billion) that Goldman raised for 1MDB has sparked investigations across several nations, and entangled the US bank in a high-profile corruption probe.

A spokesman for Goldman Sachs declined to comment on Mr Blankfein's behalf. The bank has said it believed proceeds of debt sales it underwrote were for development projects and that Leissner withheld information from the firm.

Low's presence at the meeting with Mr Blankfein, one of the most senior executives in global finance, illustrates the meteoric rise of a largely unknown financier who had managed to cultivate relationships with senior Malaysian government officials, including then Prime Minister Najib Razak.

By the time of the meeting, Low's lavish spending habits were New York tabloid fodder. Starting about two months before the meeting, according to US filings, Leissner and another Goldman banker began a years-long effort to bring Low aboard as a client, a request that compliance workers at the firm consistently denied. 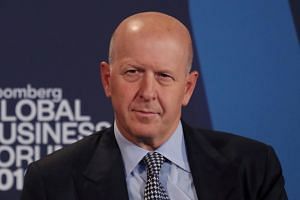 There's no indication that Mr Blankfein was aware of the internal assessments of Low, whose real name is Low Taek Jho, or knew the identities of all the people present at the meeting.

The documents filed by an FBI agent in June said that evidence supports the view that Low was present at the meeting. The agenda for the November 2009 meeting was mapped out by Low and included a "debrief" with Najib and the "1MDB boys" after Goldman executives had left, the documents show.

The meeting offered Mr Blankfein a chance to speak with Najib in his first year as prime minister, and Najib's visit to New York included meetings with other business leaders and US investors. A month after the gathering, Malaysia's Securities Commission announced that Goldman Sachs would set up fund management and corporate finance advisory operations in the nation.

Low was closely involved in helping Goldman Sachs win the Malaysian business even as Leissner and at least one other lower-ranking banker were already working to shield his role from its compliance group to avoid additional scrutiny, according to federal filings.

Goldman Sachs went on to raise as much as US$6.5 billion for 1MDB in subsequent years, receiving about US$600 million in fees.

The US has since accused Low of teaming up with the Goldman bankers to pilfer money from 1MDB.

Goldman's earnings from the deals have also become a sore point with the new Malaysian government, which hopes to recoup some of the money.

Mr Blankfein, who stepped down as Goldman Sachs's chief executive officer last month and still serves as chairman, said at a conference in New York last week that he's not aware of senior managers missing red flags in the 1MDB dealings. Instead, he said, the matter was an issue of a few employees dodging bank controls and lying about it.

The federal filings unsealed last week also place Najib and a "high-ranking executive" from the bank in a meeting with Leissner and Low in 2013 in New York. There's no indication that the executive from the later meeting is the same as the one from 2009.