Indonesia's anti-corruption agency has arrested and detained Mr Emirsyah Satar, the former head of the country's national airline Garuda, on suspicion of money laundering and bribery.

The allegations are centred on the procurement of Rolls-Royce aircraft engine parts and may even implicate politicians and government officials.

Another $1.2 million was paid to him to pay off an apartment in Singapore.

The transfers were made by a consultant, believed to be a middleman, identified as Mr Soetikno Soedarjo, who was a familiar face among Garuda employees.

Mr Soetikno often appeared at important functions that Garuda held during Mr Emirsyah's tenure from 2005 to 2014.

"The money given by Soetikno Soedarjo to Emirsyah… was not only from Rolls-Royce, but also from other parties that won contracts from Garuda," KPK commissioner Laode Muhammad Syarif said at a media briefing on Wednesday night.

Mr Soetikno received commission from Garuda's suppliers, including Rolls-Royce, which he in turn shared with Mr Emirsyah and Mr Hadinoto Soedigno, Garuda's former technical and fleet management director, Mr Laode said, adding that the payments were called "prizes" for awarding contracts to the suppliers.

Mr Laode said Mr Hadinoto received US$2.3 million and €477,000 in bank transfers from Mr Soetikno, which went to an account in Singapore.

Mr Luhut Pangaribuan, the lawyer for Mr Emirsyah, told The Straits Times that KPK found that several billions of rupiah were given to his client, adding that the funds had been returned to Mr Soetikno. "Emirsyah Satar admitted receiving gratitude money from SS, but all has been returned to him," Mr Luhut said, referring to Mr Soetikno Soedarjo.

"The gratitude money was a term coined by SS. The money did not at all affect a decision-making process (in awarding contracts to suppliers)." 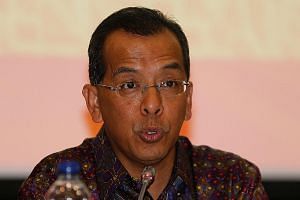 Mr Luhut stressed that the money was given to Mr Emirsyah after decisions were made.

A government source told ST that Garuda's losses were bigger than KPK indicated.

The government official, who spoke on condition of anonymity, said the markup was a staggering US$20 million for every Airbus plane with a Rolls-Royce engine, adding that more than 10 aircraft were delivered as a result of the agreements made during Mr Emirsyah's tenure.

The government source said Mr Emirsyah could not have done this alone, adding that the money received from the huge markups must have been distributed to very senior politicians and government officials.

The source claimed that the chief executive of a state-owned company or Garuda's board of directors would not be in a position high enough to facilitate such a big deal.