Acting Umno president Ahmad Zahid Hamidi was handed a convincing mandate to continue leading Malaysia's largest party, with members sticking to the status quo at internal polls yesterday despite calls for reforms after the party's shock election defeat in May.

In the three-way battle for the post of president, Datuk Seri Zahid was backed by 93 of Umno's 191 divisions as at press time, far ahead of his nearest rival and outgoing Youth chief Khairy Jamaluddin who had 51 votes, and veteran leader Tengku Razaleigh Hamzah who trailed with only 23 votes.

"Officially, Datuk Seri Dr Ahmad Zahid Hamidi is the seventh Umno president. We wish him all the best in executing his duties," the official Twitter account for the party polls posted after the former party vice-president obtained an unassailable lead last night.

Mr Khairy conceded defeat last night, tweeting: "I accept the decision with an open heart. Insya Allah (God willing) Umno's new line-up will be able to restore the people's confidence towards our party. Make total changes. Prove that Umno can change for the better."

About 150,000 delegates voted nationwide in an electoral college system, where each of the 191 divisions - based on Malaysia's parliamentary constituencies - picks one candidate for presidency.

Former deputy premier Zahid is the party's most senior leader after being promoted in 2015 by then Prime Minister Najib Razak. Datuk Seri Najib resigned as Umno president in May, after the party's shock election defeat that ended Umno's six-decade grip on power.

Mr Zahid had campaigned in the party polls on a promise to offer Malaysians "a new deal", while insisting that continuity was important for the party to bounce back at the next general election. 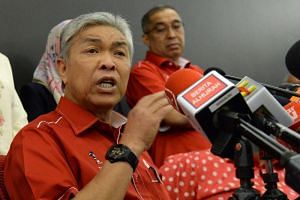 He had stridently insisted that Umno must remain a Malay-only party, and opposed watering down pro-Malay policies. Mr Khairy had taken a more liberal tack, saying that Umno must be open to all suggestions as it is fighting for survival.

Analysts say Mr Zahid's assertions during the two-week campaign that he can return Umno to power even before the next GE convinced delegates to give him a chance.

"Zahid's campaign message that he will bring Umno into federal government before the next general election might have tipped the balance his way," said Vriens & Partners' political analyst Adib Zalkapli.

"After all, the next Umno polls are due before then. If he is not successful, then they can pick a new war-time general."

The Bagan Datuk MP addressed delegates in the past week with speeches that indicated he had good relations with leaders in the Pakatan Harapan government, especially prime minister-in-waiting Anwar Ibrahim.

No official results were available for the remaining posts at press time due to the large number of candidates. Mr Zahid's allies Ismail Sabri Yaakob and Mahdzir Khalid are set to take two of the vice-presidential spots in a seven-cornered battle.