The once-ubiquitous jeepney may be headed for the end of the road, but welder Andres Bartiz has vivid memories of a different era when the iconic taxis flashed through jammed streets.

"We were selling jeepneys like they were toys," said Mr Bartiz, who has worked at jeepney maker Sarao Motors since 1979.

"People would walk in, pick a jeepney, pay in cash, and then drive their new jeepney home," added the 55-year-old, who now has to pick up other welding work. 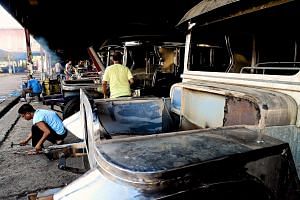 The rise and fall of the man who created an icon 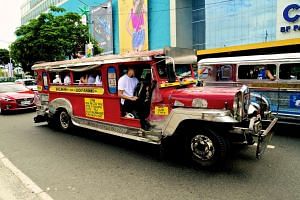 In its halcyon days, from the 1960s into the mid-1990s, Sarao Motors was assembling six to 10 jeepneys a day at its Las Pinas city factory 30 minutes south of Manila. But times have changed, and now the company considers it a lucky year if it has three orders.

In the 1980s, more than half a million jeepneys buzzed all over the Philippines. Now, there are fewer than 160,000, and their numbers are falling, after the government stopped issuing new jeepney franchises as part of its plan to cut pollution and the number of vehicles on the road. It has also started phasing out jeepneys that have been on the road for more than 15 years.

THOSE WERE THE DAYS

We were selling jeepneys like they were toys. People would walk in, pick a jeepney, pay in cash, and then drive their new jeepney home.

WELDER ANDRES BARTIZ, who has worked at jeepney maker Sarao Motors since 1979, recalling the glory days of Manila's unique vehicle in the 1960s to mid-1990s

The jeepney has hardly evolved since Mr Leonardo Sarao assembled the very first unit from a used US military jeep in 1953.

It remained loud and gaudy. That went towards making it an icon. But assembled like the motor vehicle equivalent of Frankenstein, it also broke down often. That made it impractical in the long run.

When Japanese carmakers began selling more efficient rivals, the jeepney began looking less like an icon and more like a dinosaur.

Sarao, like the handful of other jeepney makers, now stays afloat mostly by repairing or restoring old jeepneys. Jeepney operators are now ordering new vehicles just so that they can milk the remaining years of an old franchise, all of which will run out in 15 years.

Sarao's story reflects that of the Philippine car industry.

The grand plan for a national car did not take into consideration local assemblers like Sarao, or build on their know-how, and it hit a dead end.

"Sarao never had the scale to be a major assembler on its own, and it could not find a partner to raise it to that scale," said Mr Rey Enano, a business editor with Manila Standard Today who covered the car industry in the 1970s and 1980s.

As early as 1965, long before Malaysia had the Proton and Indonesia, the Timor, the Philippines already had a Filipino-branded car: the Sakbayan. But that was not really a national car; it was just a cheap knock-off of a Volkswagen Country Buggy.

In 1971, the government began a serious effort to have a truly national car.

For about 30 years, it fiddled with tariffs and import restrictions to compel Japanese carmakers not only to assemble their vehicles in the Philippines, but also to share technologies in car parts production.

The goal was to grow an assembly and car parts industry capable of producing an 80 per cent Philippine-made car, complete with a Filipino badge and emblem, by 2000.

"The plan to have a Filipino car… started with the wrong gears", and it never picked up speed, according to the United Nations Conference on Trade and Development (Unctad).

Toyota, Nissan and Mitsubishi set up shop in the Philippines to sell to Filipinos, not hand-hold a fledgling car industry.

They were setting up operations across Asia in countries that offered the lowest tariffs, best incentives and largest markets. They were, for instance, producing transmission kits in Thailand, car batteries in the Philippines, windshield wipers in Vietnam, and shipping these parts to assembly plants in China.

Unctad said the Philippines - at a time when it had a thriving car parts sector - failed to scale up the value chain and graduate to producing original equipment, the way South Korea and China did. "The Philippines was an assembler 30 years ago; today, it still is," it said.

When a debt crisis struck the Philippines in 1983 and a financial contagion swept Asia in 1997, the nation had very little to offer to compel foreign carmakers to stay on. Ford, General Motors and Toyota left.

The mid-1980s were also a crucial time when Japan, following the revaluation of the yen, was ploughing money into South-east Asia. With political crisis gripping the Philippines as the Marcos regime unravelled, Japanese carmakers found Thailand a more attractive location.

Despite a variety of car development programmes, the Philippines did not recover from these crises.

And there was no concerted effort to take local assemblers like Sarao and give them the support to build on their own technologies to develop their own cars.

Now, with the emergence of the Asean Economic Community and new regional free trade deals, the country has little to offer in terms of tariff-related incentives and tax breaks to carmakers.

With few incentives, Ford, which returned to the Philippines in 1999, shut its plant in 2013.

It said one issue was "economies of scale". It was assembling just 36,000 vehicles a year in the Philippines, way lower than its facilities in China, India and Thailand, where it was producing at least 300,000.

The Philippines is now trying to revive its car industry.

President Benigno Aquino signed in May this year an executive order to offer tax breaks to as many as three carmakers who would set up assembly operations and parts production here. Rules and regulations are still being drafted.

That effort, though, may be too little too late. The Philippines is probably "no longer a competitive place for automakers", said Ms Jessada Thongpak, an analyst with IHS Automotive in Bangkok.

The country is forecast to produce 300,000 vehicles by year's end. By comparison, Thailand will produce 2.14 million, and Indonesia, 1.3 million.

Once ubiquitous, the jeepney is nearing the end of the road http://str.sg/ZDCP

A version of this article appeared in the print edition of The Straits Times on December 08, 2015, with the headline 'End of the road for Manila's jeepneys'. Subscribe
Topics:
More
Whatsapp Linkedin FB Messenger Telegram Reddit WeChat Pinterest Print Purchase Article Copy permalink