Indonesia's Riau province, which sits close to Singapore and Malaysia, has declared a state of emergency to fight the haze and secure more aid from the central government.

This comes after pollution in Riau's capital of Pekanbaru hit record highs, with the PM10 Pollutant Standards Index crossing 700 on Sunday.

The fires and the haze in the province will likely lead to material losses of up to 50 trillion rupiah (S$4.9 billion), the Environmental Study Centre in Riau University estimated.

"All components (of society) will be deployed, and the number of personnel and funds will be increased to put an end to the problem," he told reporters.

Indonesia, home to the world's third-biggest tropical rainforest after the Amazon and Congo Basin, is struggling to tackle the fires engulfing Sumatra and Kalimantan which are spreading haze in the region.

From January to last month, fires raged across 328,724ha of land, of which 27.3 per cent was peatland, according to the BNPB.

Some 49,266ha of the affected areas was located in Riau, and more than 80 per cent of it was peatland.

Peat fires are more difficult to extinguish as they can continue burning underground for weeks. 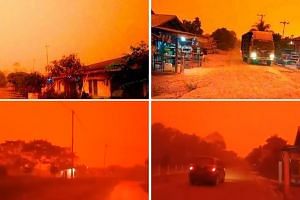 This is not the Red Planet. This is Jambi, Indonesia

However, Lieutenant-General Doni noted that the water-bombing operations have not been effective as many fires continued to smoulder in the peatlands.

However, cloud-seeding operations in Riau and Central Kalimantan have brought some rain and a temporary respite.

Despite the uphill battle, Indonesia insists that it will rely only on its own resources to put out the fires, Dr Agus said.

"In this case, the Indonesian government considers that we still have sufficient resources in terms of personnel and funds, and therefore, we have yet to need foreign assistance, both from Malaysia and Singapore," he said.

Malaysia has offered its assistance in battling fires in both Kalimantan and Sumatra.

Similarly, Singapore's Minister for the Environment and Water Resources Masagos Zulkifli said in a Facebook post on Wednes-day that the Republic had offered technical firefighting assistance to Indonesia.

Meanwhile, the Indonesian police have identified 296 suspects for starting the fires. Nine of them are companies, said National Police spokesman Dedi Prasetyo.

He added that in Central Kalimantan, police are investigating 33 companies whose concessions were ravaged by fires.