Indonesian President Joko Widodo could emerge as the biggest winner in his country's regional elections yesterday, although he was not on the ballot.

Quick counts of votes showed candidates nominated by his allies - the same parties that also back his re-election bid - did well at the polls in Java, Indonesia's most populous region and home to three provinces that play a strategic role in next year's presidential race.

Among the electoral winners was popular Bandung Mayor Ridwan Kamil, who is poised to be the next governor of West Java, according to the quick counts of votes from a representative sample of polling stations last night.

Although the official roll-out of the results will start next week, such samples have been accurate in past elections in Indonesia.

A win for Mr Ridwan - who is nominated by ruling coalition members NasDem, the National Awakening Party, United Development Party and Hanura - will be a major boost for Mr Joko as he seeks a second term in office.

But the West Java gubernatorial race, arguably the hottest among the 171 electoral contests held yesterday, went right down to the wire with early counts showing Mr Ridwan holding just a slight lead over his nearest rival Sudrajat, a retired two-star general.

Mr Ridwan, 46, garnered between 32 per cent and 34 per cent of votes, according to the quick counts of four pollsters: Charta Politika, Saiful Mujani Research & Consulting, Indo Barometer and Lembaga Survei Indonesia.

Mr Sudrajat had between 28 per cent and 30 per cent of the votes.

Speaking to his supporters yesterday, Mr Ridwan pledged to serve everyone in West Java. "If elected, I will be a leader... who does not discriminate according to religion, race, groups and between those who voted for me and those who did not," he said.

The tight margin between Mr Ridwan and Mr Sudrajat, however, could be a sign that it may not be smooth sailing for Mr Joko when he campaigns in West Java.

Elsewhere, the early counts are turning out as expected, with pre-election favourites and allies of Mr Joko likely to be victorious as well. 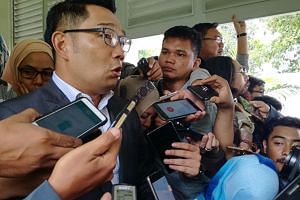 They include former social affairs minister Khofifah Indar Parawansa, to whom Mr Joko gave his blessings when she resigned to run for governor of East Java, and Central Java incumbent governor Ganjar Pranowo.

The polls in Java have always been seen as a proxy battle between the President and Gerindra chief Prabowo Subianto, who lost to Mr Joko in the 2014 presidential polls.

A rematch between them is on the cards and Mr Joko would stand in good stead with an ally at the helm of West Java, an electorate with more than 30 million voters, most of whom supported Mr Prabowo in the last election.

In yesterday's election, more than 150 million registered voters, making up over half of Indonesia's 260 million population, were set to elect their governors, mayors and regents.

Voters streamed into polling stations in 17 provinces, 39 cities and 115 regencies across the country from as early as 7am local time, amid tight security. But voting was peaceful and many candidates started appealing for calm as the sample counts trickled in.

Mr Joko said in a Twitter post as polls opened: "Our choices may differ, but we remain brothers."