The big electoral rematch between Indonesian President Joko Widodo and his old rival Prabowo Subianto appears set to retrace the route of the 2014 race, setting the incumbent on course for a second term in office.

Unofficial quick counts - tallies of votes from a sample of polling places - have placed Mr Joko comfortably, though not overwhelmingly, ahead of Mr Prabowo, according to five pollsters.

The widest margin of victory projected for Mr Joko came from Jakarta-based Poltracking Indonesia, which claimed he would snag 55.3 per cent of the vote to Mr Prabowo's 44.7 per cent and win by 10.6 percentage points. Meanwhile, Indikator Politik Indonesia said he would be ahead by just 7.8 percentage points, the narrowest margin indicated.

More significantly, the popular President may not enjoy the landslide victory that many had predicted ahead of the long and bitter presidential race, if the quick counts based on 80 per cent of the ballot data sampled by pollsters turn out to be accurate.

The official results from the General Elections Commission (KPU) are expected only next week, but Mr Joko seems firmly on track to return to office, observers said.

After the quick counts had been released yesterday, Mr Joko addressed his supporters and called for unity among Indonesians, urging them to "unite as brothers and sisters" after what has been a divisive campaign. 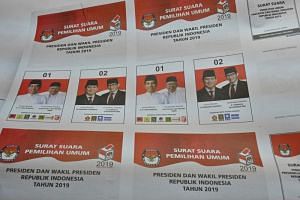 While he acknowledged that the quick counts were in his favour, there was little in Mr Joko's demeanour yesterday to suggest that he saw the results as a victory.

"We have to be patient and wait for the official tabulation of the votes by the KPU," said Mr Joko.

His opponent, however, was confident that an upset was on the cards, claiming victory even as he disputed the quick-count results showing that Mr Joko was on course for a win.

Mr Prabowo told reporters that a "real count" by his campaign team indicated that he had garnered 62 per cent of the votes cast at about 320,000 polling stations across the country yesterday.

"There have been attempts by survey organisations that we know of, cooperating with one side, to steer public opinion as if we have lost," said Mr Prabowo, questioning the impartiality of the pollsters that conducted the unofficial quick counts yesterday.

He also expressed concerns over anomalies that he said may have hampered his chances in the polls.

"Many ballots were not delivered to the polling stations. Many polling stations were opened at 11am (instead of 7am)," he said. "Our supporters didn't get the invitation to vote, and so on. Many ballots had previously been cast in favour of (our opponent)."

All signs now point to a testing few days for the KPU as it races to consolidate the votes across the vast archipelagic state, where more than 192 million Indonesians were eligible to vote yesterday.

Observers say the official results, set to be released from April 25, are unlikely to change the projected outcome of the election.

They also expect Mr Prabowo to mount a legal challenge, as he did following the 2014 election, if he suffers a narrow loss this time.

"Prabowo has vowed to contest the election result based on his claims of voter fraud and irregularities, and the opposition leader previously called for his supporters to protest if he loses," said Mr Peter Mumford, the director for Asia at Eurasia Group, a political risk consultancy based in the United States.

"However, the President's victory looks decisive enough for this not to significantly increase political risks - though we will be watching this closely in the coming weeks."