MANILA (REUTERS) - Police at the helm of the Philippine war on drugs were given top posts in the national force on Thursday (April 19), indicating no let-up in a brutal crackdown that has caused international alarm, and defined President Rodrigo Duterte's 21-month presidency.

The job of national police chief was given to Oscar Albayalde, a strict disciplinarian who has been in charge of Metro Manila, where the vast majority of the thousands of drug war killings have occurred.

He was succeeded as commander of the capital police by Camilo Cascolan, the architect of the controversial operational plan of the anti-drug campaign, "Double Barrel".

About 4,100 people have been killed by police in the Philippines since July 2016 in what the authorities said were shootouts during anti-narcotics operations.

At least 2,300 drug-related deaths have occurred separately, at the hands of what police say are unknown assassins.

Human rights groups believe the death toll has been understated, and accuse the authorities of executing suspects and staging crime scenes. Police deny that and say their more than 130,000 arrests prove their intent to preserve life.

Cascolan is the latest officer promoted to a top command post having served in the Davao region during the 22 years Duterte was a mayor there. The outgoing police chief, Ronald dela Rosa, also served in Davao. 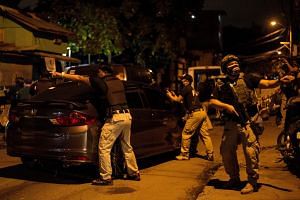 Cascolan's position as head of operations will go to Mao Aplasca, also from the Davao region.

Albayalde vowed no relent in the campaign and to ensure continuity of its "remarkable accomplishments", including arresting or convincing tens of thousands of people to surrender, and the "neutralising" of drug suspects.

"We will not relent on our war against illegal drugs and other forms of criminality. The drug menace, we must all understand, is a worldwide phenomenon," Albayalde said in a speech.

"We will help and support each other to fight and win this war." The outgoing police chief, Dela Rosa, will head the bureau of corrections.

He is leaving behind a police force with "a sordid human rights record", according to Carlos Conde, a researcher for the New York based Human Rights Watch.

In his departure speech, Dela Rosa lauded Duterte's for his courage to order an all-out war on drugs, and pledged his "unquestionable loyalty" to him.

"It was an order I certainly could not refuse. I shared the same sentiments as the president and would not let pass the opportunity to do my share," he said.