A maverick candidate poised to become the next president of the Philippines said yesterday that he would pursue multilateral talks involving China, the United States and Japan to resolve disputes over the South China Sea.

Mr Rodrigo Duterte, the 71-year-old mayor of the southern Philippine city of Davao, said China and the Philippines could together exploit offshore oil and gas in the resource-rich waters.

"If you want joint ventures, fine. I believe in sharing," he told reporters as an unofficial vote count showed him building up a sizeable lead over his nearest rivals. 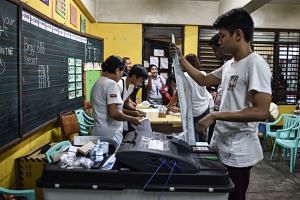 But Mr Duterte insisted that Beijing should respect the Philippines' exclusive economic zone, parts of which overlap with China's vast claims to the South China Sea. 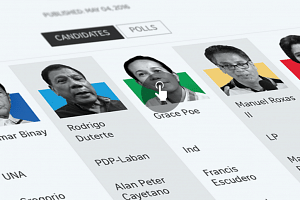 He had said previously that he is open to holding direct talks with China if multilateral efforts do not bear fruit in two years.

With 81 per cent of the votes tallied as of midnight, Mr Duterte had chalked up 13.7 million votes, against Mr Roxas' 8.1 million and Ms Poe's 7.7 million.

Analysts said these numbers point to a likely win for Mr Duterte, and that it may be time for the nation to move beyond the elections.

Mr Dindo Manhit, managing director of policy research firm Stratbase, said: "It's time to build on the legitimate results of the election. It's a starting point. We need to prepare (the transition) from election to governance."

Yesterday's vote is seen as ending uncertainty over who will succeed outgoing President Benigno Aquino, but anxieties will likely remain until Mr Duterte can unveil a more detailed economic road map.

"It's important that the next administration defines the programmes clearly in order to reduce or make the public more realistic with their expectations," Mr Fritz Ocampo, chief investment officer at Manila-based BDO Unibank, told Bloomberg.

"A lot of hype and promises were made during the campaign," he added.

From a reluctant candidate, Mr Duterte raced to the top with a promise to upend a system that his millions of followers - mostly a middle class frustrated with massive traffic jams and government ineptitude - believe has benefited only the elite.

He has promised to end crime and corruption in three to six months.

He has said he will push to amend the Constitution to dismantle cartels by letting in more foreign players and to turn the government into a union of semi-autonomous regions.

He has also threatened to dissolve Congress if it gets in his way.

Commenting on the likelihood of a Duterte presidency, Mr Richard Javad Heydarian, political analyst at De La Salle University, said: "It's hard to distinguish between bluster and conviction, as far as Duterte is concerned.