MANILA - President Rodrigo Duterte has granted an absolute pardon to a United States serviceman who was found guilty of killing a Filipino transgender woman nearly five years ago.

"Cutting matters short over what constitutes time served, and since where he was detained was not in the prisoner's control - and to do justice - the President has granted an absolute pardon to Pemberton," he said.

Mr Duterte's spokesman Harry Roque later confirmed that Mr Duterte "had erased the jail term that Pemberton should have served".

"He can go home because he has been pardoned," said Mr Roque, who once served as a lawyer for the victim's family.

The spokesman insisted that the President did not overturn Mr Pemberton's conviction.

Mr Pemberton was found guilty of killing Ms Jennifer Laude, then 26, in a drunken rage inside a motel in Olongapo city, near the former US naval base in Subic Bay, north of the capital Manila.

Court records showed that on Oct 12, 2014, Mr Pemberton, while off duty after participating in a joint military exercise off Subic, met Ms Laude, who was dressed as a schoolgirl, inside a bar at Olongapo's red-light district. They later agreed to head to a nearby motel.

As they were having sex, the marine turned violent when he realised Ms Laude - who was born "Jeffrey Laude" - had male genitals.

In his testimony, Mr Pemberton admitted arm-locking Ms Laude's head, causing her to black out. He then dragged Ms Laude to a toilet to revive her. 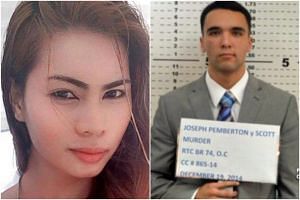 His lawyers argued that Ms Laude was still breathing when he left the place. They suggested, based on DNA found on Ms Laude's neck, that someone else who was after money might have finished her off.

The trial judge found that the defence failed to substantiate this theory.

The same judge last Tuesday (Sept 1) ordered Mr Pemberton's early release, determining that five years could be shaved off his 10-year sentence on account of his "good behaviour" while in detention.

But the judge's decision was questioned by lawyers representing Ms Laude's family.

They argued that there was no proof that Mr Pemberton, having been detained with special privileges inside a special jail at a military camp in Manila, merited a commuted sentence.

Mr Duterte's decision took even his critics by surprise, considering his anti-US rhetoric in recent years as he pursued closer ties with China.

"What is the basis of granting absolute pardon to… Pemberton? Why pre-empt the court process? Why is the President in a rush to pardon the killer of Filipino transwoman Jennifer Laude? The absolute pardon, and the context and timing of the same, is a betrayal of national interest and a great injustice for the Laude family," said Mr Renato Reyes, spokesman of the nationalist group Bagong Alyansang Makabayan (New People's Alliance).

"He has always been for an independent foreign policy," he said.

The case struck a nerve in the Philippines as questions over custody of US servicemen accused of crimes turned into jurisdictional disputes that sparked heated debates on sovereignty.

It once again tested provisions of the 1999 Visiting Forces Agreement (VFA), specifically those on jurisdiction over US troops who commit crimes while off-duty in the Philippines.

Mr Duterte sought to scrap that pact in February, but changed his mind in June, noting the US' help to the Philippines' response to the Covid-19 pandemic.

The VFA's provisions on custody were first tested nearly 15 years ago when another American serviceman, Lance Corporal Daniel Smith, was accused of raping Filipina Suzette Nicolas inside a moving van in Subic as his fellow marines cheered him on.

The Philippines turned over custody of Mr Smith to the US embassy, sparking outrage among anti-American nationalists.

In December 2006, a lower court sentenced him to 40 years in prison, but he was kept at the US embassy instead of a local jail till April 2009, when an appellate court acquitted him after Ms Nicolas recanted her testimony.