He tells Senate he was part of death squad formed by the then Davao mayor to kill criminals, drug pushers, rapists

A self-confessed hitman has linked Philippine President Rodrigo Duterte to a death squad that slaughtered more than a thousand people over two decades in gruesome murders that included feeding a man to a crocodile alive. He said he saw Mr Duterte himself pump more than 200 bullets into a Justice Ministry agent.

In explosive allegations before the Senate yesterday, Mr Edgar Matobato, 57, testified that he and a couple of policemen and former communist guerillas took part in the killings as part of a "death squad" formed by Mr Duterte after he became mayor of Davao in 1988 "to kill criminals, drug pushers, snatchers, rapists".

The squad disembowelled, strangled, torched or hacked their victims to pieces, or weighed down their bodies with sand and concrete to sink to the bottom of a bay "for the fish to feed on", he claimed.

In one particularly harrowing incident in 2007, they nabbed a suspected kidnapper and fed him alive to a crocodile. Mr Matobato identified the agent allegedly responsible for that gruesome murder as lawyer Dante Gierran, who now heads the agency that is the equivalent of the US Federal Bureau of Investigation.

"The officers told us ordinary killings won't do," said Mr Matobato. "They are sadists." 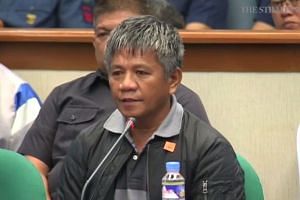 Witness was once part of plot to kill lead investigator 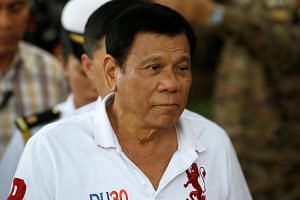 The Senate inquiry began about a month ago and is led by Senator Leila de Lima, a critic of Mr Duterte's anti-crime push that has left another 3,000 dead since Mr Duterte took office on June 30.

Mr Duterte has accused Ms de Lima of initiating the probe to derail his campaign, saying she has been coddling drug kingpins.

In earlier hearings, the committee heard from the families of drug suspects killed by lawmen or vigilantes.

Mr Matobato was the first to link Mr Duterte to extrajudicial killings in Davao, saying he took part as a member of a "team" that came to be known as the "Lambada boys", after the Brazilian ballroom dance craze of the mid-1980s.

In his testimony, Mr Matobato said Mr Duterte himself or active-duty Davao police officers assigned to his office as mayor would give the orders to kill.

Though their orders were to go after criminals, Mr Matobato said he and his squad were also ordered to kill a dance instructor who taught Mr Duterte's sister, Jocelyn, in 2013; a man who had an altercation at a petrol station with Mr Duterte's son Paolo, now Davao's vice-mayor; and a fixer at a transport agency in 2002.

The squad also went after people associated with Mr Duterte's opponents, he said. In 2003, they gunned down Mr Jun Pala, a radio commentator critical of Mr Duterte's alleged communist ties.

Mr Matobato told the Senate that he saw Mr Duterte himself unload two magazine clips of an Uzi submachine gun on a government agent who figured in a shootout with his men in Davao in 2007.

Mr Duterte "probably pumped over 200 bullets into the man", he said.

Mr Matobato said he was also told Mr Paolo Duterte ordered the killing of Mr Richard King, a wealthy businessman, in 2014 because of a feud over a woman.

He also accused the younger Mr Duterte of using drugs.

"He'd sometimes run amok when he was high," he said.

Mr Matobato testified to participating in more than 1,000 killings, shooting, garroting or stabbing 50 people himself.

Most of the bodies were buried at a quarry owned by a Davao policeman as well as an empty plot of land elsewhere, he said.

He admitted strangling a man he was told was an Islamist terrorist in 2002, then hacking the man's body to pieces.

Mr Matobato also said he hurled a grenade at a mosque in 1993 after militants bombed the Davao cathedral. He said he was in the same room when Mr Duterte supposedly ordered a certain officer to "massacre Muslims in that mosque".

Mr Matobato said Mr Duterte and his son "had people killed in Davao like they were chickens".

He added: "I will not dignify the accusations of a madman."