DAVAO • Philippine President Rodrigo Duterte said yesterday he was open to exploring the South China Sea's natural resources with rival claimants China and Vietnam, after securing a "windfall" in Beijing.

He also emphasised he had no immediate plans to pressure China over an international tribunal's ruling last year that its sweeping claims to most of the sea were unlawful.

"If we can get something there with no hassle at all, why not," he told reporters when asked about a proposal for jointly exploring the sea with China and Vietnam. He emphasised that the deal would have to be "fair and balanced".

He made no mention of Malaysia and Brunei, which also have claims to the sea.

The competing claims have made the sea, which is believed to sit atop vast oil and gas deposits, one of Asia's potential military flash points. Beijing's efforts to cement its claims by building artificial islands and expanding a military presence there have added to the tensions.

Mr Duterte, who took office last year, abandoned the policy of his predecessor, Mr Benigno Aquino, to challenge Beijing in diplomatic circles and instead sought to repair bilateral relations. 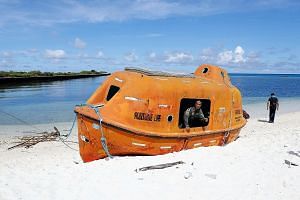 He has said his decision has earned the Philippines billions of dollars in Chinese investments and aid.

He spoke yesterday after returning from Beijing, where he met Chinese President Xi Jinping and Premier Li Keqiang separately on the sidelines of a summit on a global trade infrastructure project. Mr Xi called the Philippines an "important partner" in his Belt and Road initiative.

A version of this article appeared in the print edition of The Straits Times on May 17, 2017, with the headline 'Duterte open to joint exploration'. Subscribe
Topics:
More
Whatsapp Linkedin FB Messenger Telegram Reddit WeChat Pinterest Print Purchase Article Copy permalink