Profanity-spewing candidate could yet cruise to Philippines' highest public office

A tough-talking mayor kept his wide lead in the Philippines presidential race, surviving an uproar over a joke he cracked about rape and coming out unscathed in the final public debate before the May 9 polls.

Davao mayor Rodrigo Duterte, 71, who in his profanity-laced campaign speeches has promised to come down hard on crime, chalked up 33 per cent in the April 18 to 20 Social Weather Stations survey, nine points ahead of his nearest rival, Senator Grace Poe, 47.

Meanwhile, a groundswell of anti-Marcos sentiment has dislodged Senator Ferdinand Marcos Jr., 58 - son and namesake of the late dictator - as the front runner among the candidates for vice-president.

Ms Leni Robredo, 52, widow of a popular Cabinet minister, took a slim lead with 26 per cent against Mr Marcos' 25 per cent.

On April 18, news broke about a YouTube video that showed Mr Duterte telling his supporters, in jest, that he should have had the first turn at an Australian who was raped repeatedly and brutally killed during a prison riot 27 years ago. 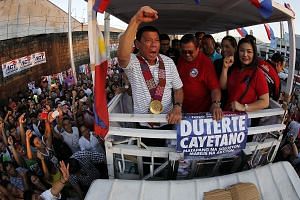 That provoked condemnations both here and abroad, but Mr Duterte's supporters were quick to defend him. The new survey suggests Mr Duterte may survive the "rape joke" episode and, with his commanding lead and only two weeks left before the elections, cruise his way to the presidency.

His tough talk has resonated with voters fed up with crime and a corruption-hobbled economy. He has promised to wipe out drugs, crime and graft within six months, if elected.

University of Santo Tomas political science professor Edmund Tayao told BusinessWorld, the daily that commissioned the survey, that the outcome was "not yet conclusive". He added that Mr Duterte uttered "other remarks" that could still shake up the field, like his threat to sever ties with the United States and Australia after their ambassadors criticised him for his comments.

Mr Ramon Casiple, executive director of the Institute for Political and Electoral Reform, said "the rape issue... touches on family values". "Some of Mr Duterte's hardcore followers... have already turned away from him," he told Agence France-Presse.

Mr Duterte's rivals refrained on Sunday from attacking him for his rape joke in the last of three public debates before over 55 million Filipinos cast their votes. The closest the topic came up was when Ms Poe asked: "What will happen to women under your administration?"

Mr Duterte replied that he had always championed women's rights in his city. Pivoting on his rape comments, he said: "I killed all 16 (prisoners involved). I cursed, then I narrated it in a different situation. There was no malice. It was just a narration."

One issue that drew more airtime during the nationally televised debate was the South China Sea. All candidates pledged to push back against claims by China.

Mr Duterte said he would personally visit the territory to stake his nation's claim if China refuses to accept the outcome of international arbitration at the Hague, expected to be handed down in June.

Ms Poe said the South China Sea was not China's "personal aquarium", adding that she would provide more boats to the Philippine Coast Guard and radios to Filipino fishermen going into disputed waters, and would seek more international assistance in maintaining sovereignty.