In a Facebook post on Monday, DPM Teo said he was happy to be back in HCMC, Vietnam's largest city, which he first visited in 1993 with then Senior Minister Lee Kuan Yew.

He said he had an engaging discussion with Secretary Nhan on the challenges faced by cities and "how we can strengthen cooperation in urban planning and smart city development".

Singapore is the top foreign investor in Ho Chi Minh City, with cumulative investments of more than US$10 billion (S$13.5 billion) in over 1,100 projects.

Mr Teo, who is also Coordinating Minister for National Security, and Mr Nhan expressed their satisfaction with the robust economic ties between Singapore and HCMC, and welcomed further economic cooperation.

On the same day, Mr Teo officiated with chairman of the HCMC People's Committee Nguyen Thanh Phong at events related to property projects - the unveiling of Mapletree's V Plaza and the opening of Oakwood Residence Saigon, a mixed-use project jointly developed with Saigon Co-Op that integrates residential, commercial and retail components.

Saigon is the former name for Ho Chi Minh City. 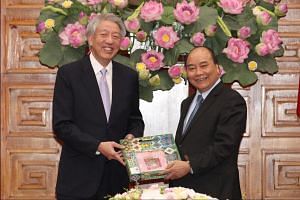 He was scheduled to meet Singaporeans living and working in the city on Monday evening at a reception hosted by Singapore's Ambassador to Vietnam Catherine Wong.

Mr Teo's visit to HCMC, which he described in his Facebook post as "vibrant and energetic", forms the third leg of his official visit to Vietnam which began on March 21 and will end on Tuesday (March 26).

Before he leaves Ho Chi Minh City on Tuesday, DPM Teo will meet members of the Singaporean and Vietnamese business community for breakfast. He will also visit Keppel Land's retail and residential developments Estella Place and Estella Heights and receive a briefing on Keppel Land's future projects in the city before returning to Singapore.