Some feel Mahathir will abandon opposition if PM is ousted

Far from galvanising Malaysians into a unified front against Prime Minister Najib Razak, a loose pact put together by former premier Mahathir Mohamad just a week ago has caused cracks among the opposition, Umno figures and civil society icons.

Netizens are hotly debating the plan that has led to 90-year-old Tun Dr Mahathir emerging as the de facto opposition chief, a disconcerting outcome for the anti-establishment crowd who see the long-serving former premier as a symbol of authoritarian rule.

They also see him as someone who will support the continued rule of the Umno-led Barisan Nasional (BN) if Datuk Seri Najib is ousted. 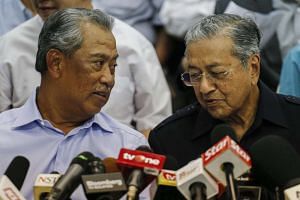 Activist Gayathry Venkiteswaran, who has spent seven years fighting for press freedom, said in a widely circulated Facebook post that the so-called Citizens' Alliance does nothing for civil liberties, but allows Umno signatories to "present themselves as the 'reformers' or the conscience of the party".

And in another blow to the rainbow alliance, while a list of 58 prominent names were announced last Friday as signatories to the declaration calling for Mr Najib's ouster, only 45 actually inked the agreement.

Umno vice-president Shafie Apdal, who was sacked by Mr Najib from the Cabinet last July, and the party's most senior MP, Tengku Razaleigh Hamzah, denied signing the Citizens' Declaration.

There is a view in Umno that Dr Mahathir crossed the line by working with its long-time enemy, the Chinese-led Democratic Action Party, and NGOs rejected by the Malay nationalist party. Datuk Mohammad Anuar Yunus, leader of a group of Umno division vice-chiefs, told reporters on Tuesday: "Some of these activists fight for apostasy (leaving the Islamic faith), LGBT (lesbians, gays, bisexuals and transgenders), abolishment of syariah criminal laws and stripping off the special rights of bumiputeras."

The opposition parties have been accused of opportunism by agreeing to work with a major political nemesis, despite believing that Dr Mahathir will most likely abandon them if Mr Najib is toppled and ditch other parts of the declaration, like carrying out institutional reforms.

Some in the opposition are insisting that jailed opposition leader Anwar Ibrahim must be released as part of the deal to topple Mr Najib.

The opposition, now grouped under the Pakatan Harapan alliance, is planning a nationwide tour to get more support for the new group.

Dr Wan Azizah Ismail, president of the opposition Parti Keadilan Rakyat and who is also Anwar's wife, said: "This three-pronged approach - demanding for institutional reform, freeing Anwar and asking Najib to step down - will be mobilised together by Pakatan Harapan in its nationwide campaign."

She said it was Dr Mahathir who sought their help to oust Mr Najib, and not the other way around.

Online, the call to "Save Malaysia" by the alliance has failed to garner the same level of interest as the "Undur Najib" (Najib Step Down) and "Nothing To Hide" unofficial anti-Najib movements last year.

Mr Ahmed Kamal Nava, founder of social media analytics firm Politweet, told The Straits Times: "Young people are not jumping in on the craze as before.

"It might be apathy, or that they are starting to change their opinion. But the moves look desperate."

Mr Abdul Kadir Jasin, a former editor of the New Straits Times newspaper who was one of the signatories last Friday, said Malaysians will need more time to grasp what he called "bipartisanism".

He wrote on his blog: "We have been so deeply partisan and communally divisive in our politics for such a long time that to digest and understand this new development will take time."