2 not named on uni websites; one has MBA from alleged degree mill

PETALING JAYA • Three more politicians from the ruling coalition of Pakatan Harapan (PH) have come under scrutiny after the education credentials of Deputy Foreign Minister Marzuki Yahya were questioned.

A Facebook page, Ops Johor, questioned Johor Menteri Besar Osman Sapian's education history and alleged that he did not obtain a degree from Universiti Putra Malaysia (UPM) as claimed, The Star Online reported.

It also uploaded a picture to prove that it tried to search for Datuk Osman's name on the UPM search portal and got nothing.

"The info that Ops Johor received, UPM introduced a Bachelor in Accounts in 1985, when at the time the university did not offer Diploma in Accounts, it had only Diploma in Business Management," said the post.

Mr Osman, when asked further if the allegation was affecting his image, replied: "It is okay. Even Datuk Marzuki was hit by it."

Mr Marzuki, whose degree was initially stated on Wikipedia as being obtained from the prestigious University of Cambridge in the United Kingdom through a distance learning programme, later admitted that his degree was actually from the Cambridge International University (CIU) in the US - a suspected degree mill.

Mr Marzuki maintained that he had always said he graduated from CIU, in which he enrolled in 2002, The Star Online reported.

"When I was asked by the media, I clearly said that I was from Cambridge International University in the US and not the University of Cambridge in the UK," he said in a statement last Friday.

Amid calls for his resignation by the opposition Umno party, which questioned his integrity, Mr Marzuki said he will leave it to Prime Minister Mahathir Mohamad to decide his fate.

But The Star Online said in an editorial yesterday that the "Scam-bridge scandal" is threatening to bring down the deputy minister. 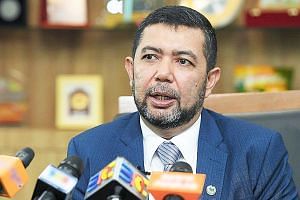 KL minister in hot water over his 'fake degree' 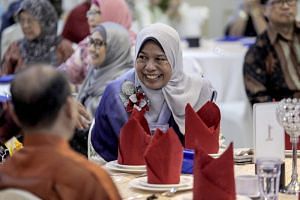 Malaysian minister Zuraida Kamaruddin says she never claimed to be an NUS graduate, amid online scrutiny

No decision yet on future of Deputy Foreign Minister Marzuki, says PM Mahathir

"The prevailing opinion on social media is that if he cannot be honest about something as simple as his academic background, how can he be trusted on affairs of state?" it said.

"It has been pointed out that if this was the private sector, the person would have been fired without further ado because it is a question of his credibility and integrity."

Housing and Local Government Minister Zuraida Kamaruddin's social science degree from the National University of Singapore (NUS), as reported by the media when she became a minister, has also been questioned.

"Kami gagal menemui carian nama YBM di National University of Singapore. Mungkin tercicir agaknya? (We were unable to find your name in the NUS. Could it have gone missing?)" he wrote.

Datuk Zuraida said in a statement late yesterday: "I have never claimed or held myself to be a graduate of NUS and I have never authorised anyone else to do so."

But he said rivals were using the degree mill allegation as an attempt to gain political mileage.