"Mixing them will create doubts on the credibility of our numbers and the professionalism of the institutions that were involved in preparing them, governed by Malaysian laws and international standards," Datuk Seri Najib said in a Facebook post late on Wednesday (May 23).

By saying that the country's government debt to GDP ratio is now 65 per cent, Mr Najib said it would only unsettle the financial markets, alarm credit rating agencies and investors' confidence in Bank Negara Malaysia.

Mr Najib, in labelling Tun Dr Mahathir's remarks as "alarming and confusing", pointed out that the Bursa Malaysia index had dropped the most compared to stock markets worldwide, resulting in tens of billions of ringgit in market value "wiped out in one day".

According to Mr Najib, the Bursa Malaysia index fell 40.78 points or 2.21 per cent on Wednesday, while the Indonesian stock index saw an increase of 0.71 per cent.

Mr Najib said that such falls in the stock market would adversely impact funds such as the Employees Provident Fund (EPF) and Permodalan Nasional Berhad (PNB).

"Similarly, issuing statements that we should not worry about our country's sovereign credit ratings being downgraded will result in further rocking the confidence in our institutions." 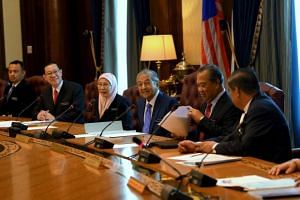 Can the new Pakatan Harapan government take the politics out of Malaysia Inc?

According to Mr Najib, a downgrade in the nation's sovereign ratings would also result in higher debt financing costs of RM10 billion per year, adding that it could cause banks which borrowed from international markets to sustain further losses.

Mr Najib said that such remarks could also result in large capital outflows from foreign investors, which will cause the ringgit to weaken as a result.

He said: "While you may want to slander and put all the blame on me to give a perception of a dire financial position to justify why you cannot deliver on your manifesto promises and to massively cut the civil service, you must remember that the country and our people comes first.

"You can also issue misleading statements on 1MDB or tell half the story about it to blame me but the time to play politics is over."

"Words spoken while in such positions of power result in actual losses to the country and the people, as was proven today in the stock market. It is no longer just about votes anymore," he added.