KUALA LUMPUR - Malaysia's government, after mediating to resolve a controversy over the relocation of a Hindu temple in Selangor, announced on Friday (Dec 14) that the land owner has agreed to transfer the plot on which the temple is located to a trust.

The move to pass ownership of the 0.4ha (one acre) land from One City Development to trustees to manage the plot where the Sri Maha Mariamman temple sits should resolve the ongoing land dispute.

"Subject to terms to be agreed upon, One City Development will transfer the one acre plot of land on which the temple is located to a trust to be administered by the High Court," Attorney-General Tommy Thomas said in a statement on Friday.

Mr Thomas said his office will apply to the High Court for the appointment of trustees who would manage both the trust and temple.

A two-day riot broke out at the temple premises in Subang Jaya, Selangor at end-November after a group of men brandished weapons to force temple devotees out of the premise.

But the devotees fought back, with 20 vehicles in the vicinity burnt during the riot, and a fireman badly injured after being attacked by an angry crowd.

The temple, which was built adjacent to a former rubber estate, had over the years saw its land ownership transferred several times until current landowner One City Development won a court order to have the temple moved to a new location. 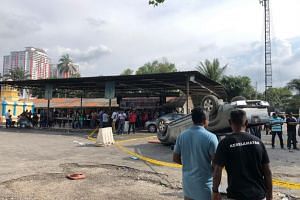 The land forms part of an ongoing development plan in the area.

But temple devotees refused to relocate and sought government intervention to keep the existing temple.

The authorities arrested over 100 suspects in connection with the fracas.

So far, 21 people have been charged over the incident.

One City Development has denied involvement with the incident, refuting allegations that it hired thugs to cause a ruckus in temple grounds.

The land dispute between the developer and temple management has been going on for years, and in 2014, temple representatives agreed to relocate to a new site in a court settlement. One City Development would in return donate RM1.5 million in compensation for the new temple to be built.

However, some of the devotees rejected the agreement and went back to court.

The most recent court hearings last month saw two different judgments on the same case - one rejected the relocation, while another upheld the 2014 settlement - putting the matter at a stalemate.

There was a crowdfunding effort initiated by a local tycoon earlier this month that saw over RM2 million (S$660,000) raised to help buy the land from the developer.

The land is estimated to be worth between RM14.37 million and RM15.33 million.