TAGAYTAY, Philippines (NYTIMES) - Philippine officials have appealed for desperate residents who were evacuated from towns endangered by the erupting Taal Volcano not to return to their homes because of the risk.

Thousands of villagers were evacuated within hours on Monday (Jan 13) after the volcano's sudden escalation of activity on Sunday, with the state's Philippine Institute of Volcanology and Seismology warning of an imminent "hazardous eruption" that could cause a "violent tsunami" in the lake waters surrounding the volcanic island. The institute raised the alert level to 4 on a scale of 5 on Sunday.

The initial explosion on Sunday sent a plume of ash about 800m into the air in a spectacular sight that caught many by surprise in the communities around the volcano, which is about 60km south of Manila. Ash from the volcano blew into the capital city Monday.

The eruption forced flight cancellations at Manila's main airport, while power was cut to large areas in the surrounding Batangas province. Overnight, earthquakes associated with the rumbling volcano rocked many areas. And overnight rains compounded the deteriorating situation, turning the coarse ash into thick, solidifying mud that clung to cars, windows and roofs.

Angelica Sinfuego, 32, who is pregnant, said she walked for three hours Sunday with her two children, Genean, 12, and Xyrene, 10, to reach safety. She was forced to handle things on her own because her husband, Jainan, has gone abroad - in his case, to Saudi Arabia, where he is an automotive technician - to find work and make money.

"The afternoon sun was nowhere. It was dark, like night time. We had to get past several hurdles, like trees that had fallen because of the weight of the ash that settled on them."

But the perilous situation did not deter some people from returning to their homes after they initially fled to safety. Some residents found ways to return to check on their livestock despite warnings of the dangers.

"We are asking assistance from the government to bring in more soldiers to help us control our residents who ignore warnings and go back," said Wilson Maralit, mayor of the town of Balete, which sits on the lake surrounding the volcano. "They slip through our security cordon and are returning there. While we also understand that they want to check on their livestock, we don't want them to get harmed."

By dawn Monday, residents of nearby towns were hosing mud off their windows and roofs even as tremors continued to rock surrounding towns. The level 4 alert meant that the volcano was preparing for a hazardous eruption that could spew ash up to 16km into the sky, sending thick smoke and ash across the surface of the lake.

"There is a fear that anytime this can explode," the mayor said. "We asked people to leave and rescued them. At first they did not want to leave, but when they saw that it continued to spew ash and steam yesterday afternoon they were forced to go."

However, he said, many men went back to secure their homes and livestock despite the warnings. "They said they had pigs, horses and cows to look after, and that they just can't leave everything," Maralit added.

Senator Francis Tolentino, a former mayor of Tagaytay, where many of the evacuated people were taken, warned that the volcano could continue rumbling for days or even weeks. 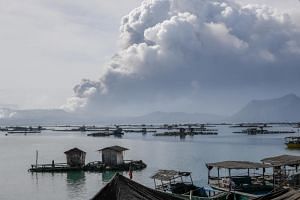 Flights between Singapore and Manila cancelled after volcano eruption: 5 things to know about Taal

He said that Talisay has been largely emptied of its residents. Nearly 10,000 people have been evacuated from eight towns, and more than 100 domestic and international flights had been cancelled in Manila, according to the government.

Rea Torres, who is from the town of Dita in Batangas, said that she and her aunt, Leonila Fungot, were kept awake practically the whole night by the volcanic activity.

"One quake was very strong late last night," Fungot said. "We were jolted by it, which sent us both praying."

The National Disaster Risk Reduction and Management Council strongly urged "a total evacuation" of the volcanic island and surrounding areas that are susceptible to a volcanic tsunami, or those living within a 12km radius from the main crater. Nearly 150 earthquakes signifying "continuous magma intrusion" were detected underneath the volcano, raising fears of additional eruptions.

The volcanic island has been showing signs of activity since early last year and has erupted a dozen times in recent history. The picturesque volcano sits on a lake that partly fills a caldera formed thousands of years ago and is a popular attraction to tourists who view it from a ridge in Cavite province to the north.