BANGKOK • Delays in the final results from Thailand's first election in eight years have added to uncertainties facing the slowing economy, raising the risk of political gridlock that could disrupt government spending and keep foreign investors away.

Voters cast their ballots on Sunday after nearly five years of military rule under former coup leader and current Prime Minister Prayut Chan-o-cha. The election was thrown into disarray with accusations of cheating, and both a pro-army party and the opposition claiming to form a government.

It may take weeks until the results become clear.

That dashed hopes for a quick transition to a stable administration that would continue economic policies and investment projects to keep South-east Asia's second-largest economy ticking.

"We think political uncertainty will remain elevated as it appears forming a government will likely be a long-drawn-out and difficult process," said economist Charnon Boonnuch of Nomura in Singapore.

"This represents a downside risk to growth as it would result in a weaker investment outlook," he said.

Both the pro-military Palang Pracharath Party seeking to keep Mr Prayut on as prime minister and the former ruling Pheu Thai Party, which is linked to self-exiled former premier Thaksin Shinawatra, have claimed that they can form a coalition government. 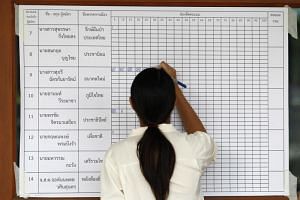 Mr Kobsidthi Silpachai, head of capital markets research at Kasikornbank, said a delay in outlining the make-up of the next administration "would adversely affect the disbursement of government capital expenditure budgets".

Government spending is already short of the targets. That is holding back private investment, which is crucial to growth as exports sag and consumption is curbed by high household debt.

Initiatives such as the ambitious US$45 billion (S$60.1 billion) Eastern Economic Corridor project to draw investment into the country's industrial east could be delayed as the transition plays out.

There are also concerns that whether the pro-junta or anti-junta camp forms the next government, it will be an unstable one, which is not good for the economy and financial markets, fund managers said.

"This should put pressure on the Thai stock market over the next three to four months," said fund manager Kamonyos Sukhumsuwan of Asset Plus Asset Management.

"Even if (pro-army) Palang Pracharath can form a government, which is positive for the market, in the longer term, there are risks of stability and difficulty in dri-ving policies."

The Thai stock market ended up 0.4 per cent yesterday, after falling 1.2 per cent on Monday, but foreign investors are still selling shares, having sold a net 12.9 billion baht (S$551 million) worth this year.

The baht eased by 0.2 per cent against the dollar yesterday, bucking gains elsewhere in Asia.

Thailand reported its strongest economic growth in six years last year, at 4.1 per cent, but still lagged behind the Philippines' 6.2 per cent, Indonesia's 5.17 per cent and Malaysia's 4.7 per cent.

For this year, the central bank last week cut its gross domestic product growth forecast for a second time in three months, to 3.8 per cent from 4 per cent, citing increased global risks.

"Investors can accept whoever will be the next government only if they can make the (country) stable, said Mr Sanan Angubolkul, vice-chairman of the Thai Chamber of Commerce.

"Still, they may wait for six months to see what the new administration's policies will be... What they don't want to see is unrest or a coup."