KUALA LUMPUR • A Muslim politician from the Chinese-based ruling party has been appointed to the board of trustees of the Islamic Propagation Foundation of Malaysia (Yadim).

The bold move by the Democratic Action Party (DAP) politician is seen by observers as one which may unsettle Malay Muslims, most of whom have yet to give the Pakatan Harapan (PH) government their support.

Yadim is an agency under the Prime Minister's Department that coordinates Islamic propagation involving government agencies and non-governmental organisations.

"Sheikh Omar was appointed as someone with a religious education background," Malaysiakini cited him as saying. "There should be no negative perception... he's a Muslim, he has merit, and contributed some good ideas in the past," he told reporters.

Critics of the PH government, of which the DAP is a member, may be discomfited by the appointment, especially as the two main opposition parties - Umno and PAS - have been pushing the line that the DAP is anti-Islam. 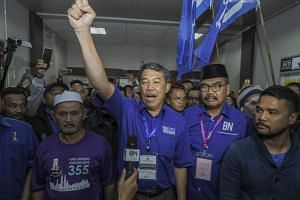 Former deputy Islamic affairs minister and Umno Youth chief Asyraf Wajdi Dusuki said yesterday that Mr Sheikh Omar is from a party that has never recognised Islam as Malaysia's official religion. Islamic institutions in Malaysia, he claims, are under threat from the "DAP-dominated" PH government.

News of the appointment comes as the four-party ruling alliance is still struggling to attract more Malay support, eight months after winning the general election.