Crown Prince Maha Vajiralong- korn was born in July 1952, the only son of King Bhumibol Adulyadej and Queen Sirikit.

He attended Chitralada School in Bangkok, Millfield School in Somerset, Britain, and The King's School in Sydney, and later underwent training at the Royal Military College in Duntroon, Australia.

As an officer in the Thai army, he took part in campaigns against the communists during the 1970s. He is a qualified military pilot who can fly Boeing 737-400s.

He has seven children with his three former wives. Two of them - Princess Bajrakitiyabha and Princess Sirivannavari - featured prominently alongside their father during the funeral rites for King Bhumibol. 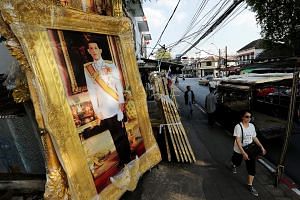 Thai Crown Prince will be invited to be King

Asked by the BBC about the pressure on him as the Crown Prince in his younger days, he said: "I don't know what it's like, because I have been born, from the first second of my life, as a prince. It's difficult to say what is it like to be a fish when you are a fish."

In one interview, published in Thai magazine Dichan in 1987, he was asked how he felt when people talked about him "as if Your Highness was a black sheep".

His reply: "Sometimes, black sheep serve a purpose, one of helping others. Black sheep help those not-too-white ones seem whiter."

In recent years, he has taken on more ceremonial duties. Last year, he presided over two mass cycling events - in honour of his parents - which observers noted were designed to set the stage for his future kingship.

While he is shielded by a tough law against insulting or defaming the royal family, there had been speculation about the royal succession ever since a 1974 constitutional amendment made it possible for a princess to ascend the throne.

Yesterday's announcement by the National Legislative Assembly to invite him to take the throne has doused this talk.