He assumes the reins 50 days after death of revered father; coronation expected only sometime next year

Thailand's Crown Prince Maha Vajiralongkorn, 64, has assumed the reins of one of the world's most high-profile monarchies.

At a special parliamentary session on Tuesday, the military- appointed legislature had hailed him as the next king.

Yesterday marked the 50th day since the death of revered King Bhumibol Adulyadej, which plunged the nation into grief. The government had declared a mourning period of one year and indicated that the black dress code for civil servants during this period will continue to apply despite the accession.

Special prayers were held for the late King Bhumibol as the vicinity of the Grand Palace - where his body lies in state - was cleaned and spruced up. Meanwhile, photography shops reported increased sales of the new king's portraits as organisations prepared to display them on their walls, in keeping with custom. 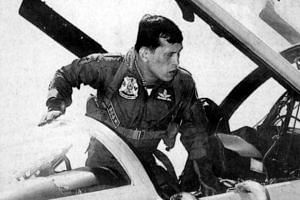 Thai media has been running photos of the new king in royal regalia, describing the anticipation of Thais who expressed faith that he would carry on his father's legacy.

The coronation is expected to be held only after King Bhumibol's cremation sometime next year. An elaborate funeral pyre will be built on the royal field next to the palace, where mourners from all over the country have gone to pay their respects since his death on Oct 13.

The accession essentially put to bed speculation about the royal succession that swirled amid the political turbulence preceding the 2014 military coup. Since then, Asean's second-largest economy has been ruled by a military government, which will soon promulgate a new Constitution ushering in a "guided" form of democracy.

The Thai populace remains politically polarised following a series of coups and judicial decisions that have ousted popularly elected governments in the past decade. While military rule has suppressed dissent for now, political analysts stress that reconciliation remains a pressing issue. It remains to be seen if the new king can play a unifying role to the same extent as his father.

Unlike in many constitutional monarchies, Thailand's palace continues to wield much influence, largely because of the moral authority built up by King Bhumibol during his 70-year reign.

Yet the kingdom's royals remain shielded by a lese majeste law that allows for someone to be jailed for up to 15 years each time he insults or defames the king, queen, regent or heir apparent. This has been more strictly enforced in recent months, with the government devoting considerable resources to scrubbing the Internet of adverse comments about the monarchy.

King Maha Vajiralongkorn Bodindradebayavarangkun, a qualified pilot schooled in Britain and Australia, is the only son of King Bhumibol and Queen Sirikit. In recent years, he had taken up more ceremonial duties on behalf of his ailing father, and publicly led two mass cycling events around the capital that were organised last year in honour of his parents.

Forty-four years after being anointed as crown prince, he is now the 10th king of the two-century-old Chakri dynasty, and helms one of the richest and most powerful monarchies in the region.