Thailand's Constitutional Court has said there is "sufficient" evidence to decide whether a political party that named King Maha Vajiralongkorn's sister as a prime minister candidate should be dissolved.

No more testimonies will be required before it makes the decision on March 7, the court announced yesterday. "There is sufficient evidence to make a ruling," it said in a statement"

Thai Raksa Chart Party, an offshoot of the former ruling Pheu Thai Party, nominated Princess Ubolratana Rajakanya for the post of prime minister on Feb 8, creating an uproar in a country which regards the royal family as above politics.

The move would have given the two parties incredible leverage in the March 24 election, but it was overruled on the same day by an announcement from the monarch.

On Feb 13, the Election Commission proposed that Thai Raksa Chart be dissolved for being "hostile to the constitutional monarchy", and forwarded the case to the court.

The party has maintained its innocence, saying it had nominated the Princess with her consent. After a brief pause, it continued election campaigning.

Like Pheu Thai, Thai Raksa Chart is linked to former prime minister Thaksin Shinawatra, who was deposed by a military coup in 2006 and lives abroad to evade jail for a graft-related conviction. Thaksin maintains a strong following in the country's north and north-east.

Pheu Thai won the last election in 2011, only to be thrown out by a coup that installed the current military government.

Dr Thawee Surarithikul, a political scientist from Sukhothai Thammathirat Open University, said dissolving Thai Raksa Chart before the election may create more unrest than if it were done after the polls. "It will dismay their supporters and voters - which I believe are sizeable - and may lead to protests and allegations of an unfair election," he told The Straits Times.

In contrast, disbanding the party after the polls will only raise questions of how the seats it wins are reallocated, he said. 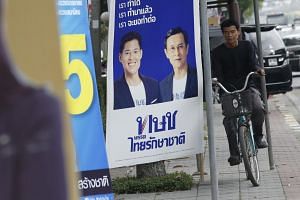 After the Thai royal storm, Princess Ubolratana's short foray into politics seems like a footnote

In another case, fast-rising political newcomer Thanathorn Juangroongruangkit got a reprieve yesterday when public prosecutors said the decision on whether to press criminal charges against him will be made after the election.

Police allege that Mr Thanathorn and two other executives from his newly-founded Future Forward Party committed computer crime - punishable by up to five years in prison - after they conducted a live discussion on Facebook last year that was critical of the ruling junta.

His party has denied the charges.

Mr Wichian Thanompichai, who heads the Office of Criminal Litigation, told reporters that a decision on indictment was likely on March 26.

"I don't think we can finish before the election," he told reporters, adding that there was no reason to detain Mr Thanathorn and his colleagues. "These alleged cases are not severe crimes and all the accused persons turned themselves in and extended their fullest cooperation."

Mr Thanathorn said the party will campaign for the election as planned, adding: "We believe in our sincere intentions towards the people, and we believe that people in power should allow the freedom of expression."

Future Forward, made up of several youthful political newcomers, has pledged to shrink the military and reform Thailand's patronage-heavy politics.

Should Thai Raksa Chart be dissolved before the election, Future Forward is expected to attract some spillover votes.