Citing Beijing's assertions that its claims in the contested waters date back to the Qing Dynasty, Mr Yeo said that countries did not object to China when it drew the controversial nine-dash line. Beijing uses the nine-dash-line to mark a large swathe of the areas in the South China Sea that it claims. 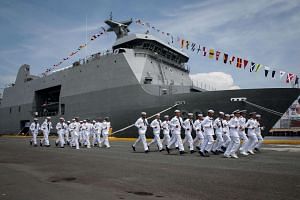 But the region's increasing economic reliance on China has created an air of concern over the economic powerhouse's influence in Asean, thus causing some member states to strengthen ties with the United States.

"No one wants China to be their enemy because there's a big loss. But everyone wants US to be their friend," said Mr Yeo at the panel session on 'Battling over Asia's economic infrastructure', which was moderated by The Straits Times Associate Editor Ravi Velloor.

The unsurpassed growth seen in China over the last decade has made geopolitics tricky for the country, said Mr Zhu Feng, the Executive Director of China Center for Collaborative Studies of the South China Sea at Nanjing University.

"The past few decades had seen China become a big elephant… The consequence is there's a growing awareness that the region is watchful to what China will be," said Mr Zhu.

Four Southeast Asian countries are in a tussle with China over parts of the South China Sea - namely Vietnam, Philippines, Malaysia and Brunei.

The territorial disputes heightened over the past year as China increased its activities by building structures on several contested islands and the United States navy conducted patrol exercises near the disputed waters.

Mr Zhu said the Chinese view on the issue is largely attributed to “domestic nationalism” - a stand that Beijing reiterated often under President Xi Jinping’s leadership to ensure its Communist Party’s support.

The presence of two superpowers in the region has added pressure to Asean member nations who have been caught in the middle as they try to manage their independence along with their economic growth. Adding to the fray is China's speed of land reclamation in the Spratly Islands and massive monetary investment support in the region. The US has also entrenched itself during President Barack Obama’s tenure by leading the 12-nation Trans-Pacific Partnership (TPP) agreement, which includes four Southeast Asian countries, while siding with Vietnam and Philippines in their claims against China over the territorial disputes.

"If (the) US is not in the region, Southeast Asia would have a weak negotiating position. But if the US is too close, we would be pawns on a chessboard," said Mr Yeo.

"Instead of being in control, we lose the game… If we (Asean) maintain solidarity, we would know how to play this game", Mr Yeo added.

Despite being nudged in between two influential nations, Malaysia’s international trade and industry minister Mustapa Mohamed said “the bottom line is income, peace, stability and quality of life” which marks the “best policy” for countries.

Discussion also centred upon the various trade agreements that appear to be either US or China-led. But despite the different pacts that Southeast Asian nations are individually a part of, Mr Yeo said the agreements are all akin to different "clubs" that countries join.

"We are already have so many club memberships... The key for Asean is to maintain a high degree of solidarity, whenever there's a new club, it's always open to Asean members".

But unity aside, Mr Yeo said success can only come from each country's internal strengths, not just the economic arrangements.