With their year-end target looming, ministers from 16 countries were rushing in Bangkok yesterday to try to iron out the thorny issues in the way of what would be the world's largest trade pact.

Thai Deputy Prime Minister Jurin Laksanawisit, who chaired the meeting of trade ministers, said that progress had been made on the proposed Regional Comprehensive Economic Partnership (RCEP) during talks yesterday.

Fourteen out of the 20 chapters in the draft agreement had been concluded, he said.

But negotiations - complemented by bilateral meetings among participants - appeared to be hard-going, with the official ministerial meeting delayed till after 6pm yesterday.

New Zealand's Minister of State for Trade and Export Growth, Mr Damien O'Connor, in a mid-afternoon tweet described the talks as "challenging".

They make up one-third of the global economy. 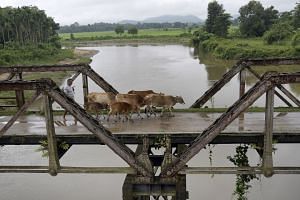 Thailand, as Asean chairman this year, is hoping to seal a deal that could be signed during the Asean summit next month.

That is equivalent to the size of Switzerland's economy.

Regional economies have struggled to regroup after the United States in 2017 withdrew from the proposed Trans-Pacific Partnership trade pact, which was seen as a rival to the RCEP.

RCEP negotiations have been taking place since 2013, but have been bogged down over various issues.

Several quarters in India have been vocal in opposing the pact.

Last Thursday, an influential group close to the Indian government began a nationwide protest, arguing that the pact would imperil Indian manufacturing and agriculture.

They fear a flood of cheap products from China, and being pitted against dairy imports from Australia and New Zealand.

New Delhi has suggested an "auto trigger" that would automatically raise levies when imports surge past a certain threshold.

Beijing, meanwhile, has floated the idea of an alternative trade deal that will leave India out of the picture.