In its editorial, the paper urges Thailand to listen to Malaysian Prime Minister Mahathir Mohamad's suggestions for ways to improve peace in southern Thailand.

Mahathir was in Bangkok last week to receive an honorary doctorate from Rangsit University in recognition of his statesmanship.

He told The Nation that Malaysia's newly appointed peace facilitator, Abdul Rahim Noor, a former police chief who is knowledgeable about the security situation along our countries' common border, is determined to get the peace process properly up and running in the Thai South.

More than 7,000 lives have been lost in the border provinces, where the vast majority of the people identify themselves as Melayu and embrace a different set of historical and cultural values than do Thais elsewhere.

The end to the conflict has never really been in sight despite government assurances to the contrary.

Dialogue with insurgent groups was initiated in 2013 and has yielded no significant results, mainly because government negotiators are never talking to the correct people.

They have dealt mainly with MARA Patani, an umbrella organisation for several long-standing separatist organisations but not the Barisan Revolusi Nasional (BRN), the one group that controls virtually all of the active armed militants. 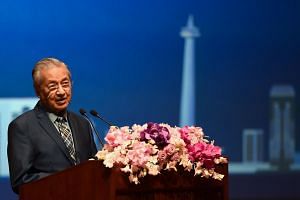 In The Shadow Of War: Life beyond checkpoints in southern Thailand

Bangkok has in the past blamed Kuala Lumpur for failing to bring the BRN to the table.

Thai leaders should instead be looking at themselves and deciding on concessions they will inevitably have to offer if they ever do come face to face with the BRN.

This is fundamentally an internal problem for Thailand.

We shouldn't be casting aspersions at our neighbours over our own shortcomings.

Malaysia volunteered to facilitate the peace process, but it understandably needs to be mindful of its government's mandate, limitations and constraints.

Thai authorities sometimes speak in terms of using rough measures to force the BRN to the table.

Ideally, of course, participants should come forward willingly, not by force.

If the atmosphere is now conducive to forging peace, no one can expect that what they get is offered from the heart.

Building confidence takes time and there are no shortcuts.

It's thus essential that all participants involved in negotiations are doing so of their own free will.

Abdul Rahim Noor reportedly informed the Thais earlier this month that he would indeed bring the BRN to the table.

We sincerely hope he is not making promises he can't keep.

Mahathir was meanwhile on a sounder course when he suggested granting the border provinces more autonomy in the hope the southerners will end their quest for independence.

Thailand must take this proposal quite seriously into consideration.

In four years, the ruling junta has come up with no meaningful policy on or approach to the matter of how the Malays of Patani might coexist in peace and dignity with the Buddhists all around them.

Notions have come and gone, initially vaunted as the unbeatable solution and then discarded as unworkable.

It has been a pathetic reflection on the mindset of Thai policy planners.