Another key by-election is taking place in Thailand tomorrow, barely two months after a similar vote saw the ruling coalition regain control of a seat held by the opposition, allowing it to further solidify its majority in Parliament.

As was the case in October, tomorrow's poll in the north-eastern province of Khon Kaen is seen as a re-run of the March general election.

Two of the main candidates are Dr Somsak Khun-ngern from Palang Pracharath, a pro-military party leading the ruling coalition; and Mr Thanik Maseepitak from Pheu Thai, the biggest force in the opposition.

The narrow margin was surprising, considering that north-east Thailand is regarded as the main stronghold of ousted prime minister Thaksin Shinawatra, who founded the Thai Rak Thai party, the predecessor of Pheu Thai.

The by-election was triggered after Nawat was disqualified as an MP in September when he was sentenced to death for masterminding a murder six years ago.

With a no-confidence parliamentary motion pending and the final reading of the annual budget Bill scheduled for January, the outcome of this poll is crucial for both sides.

The governing coalition has a thin nine-seat majority in the 500-seat Lower House. It has 253 MPs while the combined opposition has 244.

"I feel quite pressured, as we need to hold our fort in this constituency. We can't lose," Mr Thanik told The Straits Times on the sidelines of a campaign rally on Thursday. 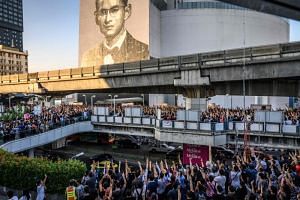 A few thousand Pheu Thai supporters waved party flags and cheered loudly while listening to speeches by Mr Thanik and other key party leaders at the rally.

"I've been voting for Thaksin's side for years. I really like his 30-baht (S$1.35) healthcare scheme," said a supporter, Mrs Chumporn Suayree, at the rally.

Interestingly, Mr Thanik's rival, Dr Somsak, is a former Thai Rak Thai executive who was banned from politics for 10 years when the party was dissolved in 2007 over electoral violations.

"I chose Palang Pracharath this time because I'd like to get out of the same old vicious circle of conflict. I believe the party offers a compromise between the two political poles," he said, referring to the many years of tension between supporters of Thaksin and his sister Yingluck Shinawatra - another former prime minister - and their opponents, which had led to massive street protests and clashes.

The unrest culminated in a coup in May 2014. The March general election was seen as an attempt to return the country to democratic rule, albeit under a Constitution approved by the military.

Capitalising on the fact that he represents the government, Dr Somsak has focused his campaign on continued state subsidies for farmers and the underprivileged.

"This government has helped us poor elderly people a lot with its welfare cards," said Mr Supat Sapumma, a 67-year-old farmer.

Many analysts say the ruling coalition will have more to gain if it wins in tomorrow's poll.

"If Palang Pracharath wins this time in Khon Kaen, this penetration into the Pheu Thai's stronghold in the north-east can spark a new momentum in favour of the government," said Dr Chaiyan Chaiyaporn, a political science professor at Chulalongkorn University.

"The razor-thin majority will remain a concern for the government until early next year, as the number of seats on both sides will keep changing for some time," he added.

Two more by-elections will be held next year.

On Tuesday, the opposition Future Forward Party - the third-largest party in Parliament after Palang Pracharath and Pheu Thai - sacked four of its MPs for repeatedly voting against the party in Parliament. It was not immediately clear which parties, if any, the sacked MPs would join now.

The future of Future Forward itself is in doubt, with all its 60 MPs girding themselves for the party's possible dissolution as the Constitutional Court deliberates on two cases against it. Last month, party leader Thanathorn Juangroongruangkit was disqualified as an MP.

Correction note: An earlier version of the story misstated the name of the professor at Chulalongkorn University. This has been corrected.