PASIR GUDANG • Malaysian officials yesterday said they have completed the cleanup of toxic chemicals in the polluted stretch of a river in Johor's Pasir Gudang that had caused thousands of people, including schoolchildren, to fall sick, while the Singapore authorities said the Republic remained unaffected by the incident.

Investigators in Malaysia have identified at least 15 types of chemicals in air samples taken from areas surrounding Sungai Kim Kim where industrial waste had been dumped.

More than 3,000 people have been treated for exposure to hazardous fumes, and 111 schools in the area have been forced to close from last Wednesday.

The cleanup of the polluted stretch of Sungai Kim Kim has been completed, said Environment Minister Yeo Bee Yin.

"The 1.5km stretch of Sungai Kim Kim that was polluted has already been cleaned up but today we want to see what more 'touch-ups' can be done," the minister was quoted as saying by Bernama news agency yesterday.

"Today can be said to be a day of monitoring. After that, then only we can look into what further action is needed," Ms Yeo added.

Johor's top health official, Dr Sahruddin Jamal, said in a statement yesterday that contractors involved in the cleanup operation had removed 1,250 tonnes of soil, water and sludge from the river.

A hazardous materials response team that carried out tests on samples after the incident had found the presence of benzene, toulene, xylene, ethylbenzene and d-limonene, with the last chemical usually a by-product of recycling tyres.

Ms Yeo said 30 teams of state environment and chemistry personnel were being deployed to 30 schools around the affected area yesterday to monitor air quality.

Johor's top health official, Dr Sahruddin Jamal, said in a statement yesterday that contractors involved in the cleanup operation had removed 1,250 tonnes of soil, water and sludge from the river.

Health Minister Dzulkefly Ahmad has said that exposure to the toxic fumes was not expected to cause long-term harm, as the level of toxicity was low.

"I'd like to emphasise that what we are witnessing here is an acute exposure where the dose is not fatal," said Datuk Seri Dzulkefly, as reported by local media. 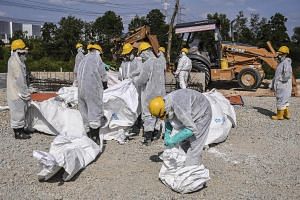 Meanwhile, Singapore has remained unaffected by the incident, the authorities said yesterday, but continued close monitoring of the Republic's air, water and seawater is being conducted.

The Singapore authorities are also getting regular updates of the situation in Pasir Gudang from their counterparts across the Causeway, said a joint statement by the Agri-Food & Veterinary Authority of Singapore, National Environment Agency (NEA), national water agency PUB and the Singapore Civil Defence Force (SCDF).

"So far, our air and water quality remains safe, and our water supply is unaffected by the incident," the statement said.

"A portable stand-off chemical gas detector deployed by the SCDF at Punggol has not detected any signs of harmful substances."

In addition, the NEA monitors ambient levels of volatile organic compounds (VOCs), such as benzene, at various locations in the Republic, including Pulau Ubin.

"The ambient levels of VOCs in the north-eastern region remain within safe levels."

The statement added: "While NEA has received feedback on smells over the past few days from about a dozen members of the public daily, these are not from any particular region of Singapore."