VIENTIANE, LAOS (NYTIMES) - Two decades ago, this sleepy city on the Mekong River was just starting to pave its streets.

Today, Vientiane, the Laotian capital, is abuzz with change. Cars choke the paved city streets and the downtown area is brimming with cafes, restaurants and bars catering to the small but growing middle class.

In recent years, Chinese investment in resource-rich Laos has strengthened the country's economy, which is projected to grow by 7 per cent this year. Vientiane's hot property market reflects this trend. Hoping that China's Belt and Road Initiative will improve connectivity with its neighbour, Laos is preparing for a new wave of Chinese investment in its property sector.

Crucial to these hopes is a 418km, US$5 billion (S$6.8 billion) rail line that Beijing seeks to extend through Laos to Thailand, a much larger market.

The completion of the rail line will bring a major change to the city, connecting landlocked Laos to China's extensive rail network, which will bring tourism and property investment, said Mr Tony Saiyalath, managing director at RentsBuy, a property company based in Vientiane.

"That will bring the property market alive," he said. "Even right now, people are starting to buy - they already know the locations of where the stations are."

The increase in Chinese investment is due in part to a new policy of "transforming assets into capital", which Laos' communist government introduced five years ago. Under the policy, state-owned property can be privatised to attract foreign investment.

The plan was especially appealing to Chinese investors, who acquired most of the high-end property in Vientiane. Prices went up sharply in 2014, but have stabilised, while rents have dropped by 20 to 30 per cent since 2016, partly because Chinese mining companies have reduced their Laos operations after concessions expired.

Chinese businessmen are the dominant property investors in Vientiane, along with a mix of Laotian, Vietnamese and Thai investors, Mr Saiyalath said.

Chinese companies are also players in the largest property developments in the city. This is apparent on the east end of downtown Vientiane's riverside, where the Laotian and French colonial architecture yields to a mile-long stretch of prime real estate developed by the Camce Investment (Lao) Co, a joint venture between China CAMC Engineering and the Laotian construction company Krittaphong Group. With its investment, Camce is aiming to draw wealthy locals and foreigners.

The Landmark compound on the east end of the Camce development combines high-end residential, hotel, restaurant and event spaces to create an exclusive, gated community. Landmark Diplomatic Residence offers luxury apartments for rent only, from US$1,000 to US$2,200 a month, said Mr Neo Liang, a Chinese manager at Camce's marketing office. Next door, offering unobstructed views of the Mekong River and Thailand on the other side, is the five-star Landmark Mekong Riverside Hotel, where President Barack Obama stayed in the presidential suite during his visit to Laos in 2016.

Farther upstream, ASEM Villa features 50 fully furnished and decorated "mansion villas" for rent, starting at US$4,500 a month. Mr Liang said the gated community was more than 90 per cent occupied, with a variety of tenants.

"They're from all over - Koreans, Japanese, Chinese, Singaporeans," he said.

A visit to ASEM Villa showed a strong presence by Chinese state-owned companies, including China Railway Group, which is building the rail line to Vientiane, and PowerChina, which has numerous projects of its own and via subsidiaries throughout Laos. Other offices with Chinese tenants included a Belt and Road information centre and a Chinese culture centre. The Singaporean ambassador's residence and the European Union's office for Laos are also there.

The area includes another five-star hotel, the Don Chan Palace. At 14 floors, it is the country's tallest. Like the Landmark compound, Don Chan Palace also has a large banquet hall and convention centre. On a recent visit, the lobbies of both hotels were primarily populated by Chinese businessmen.

Vientiane New World, an outdoor mall on the development's west end, is Camce's most public-facing development. It features a small office building for the Chinese telecommunications giant Huawei - whose advertisements flutter on lamp posts downtown - and a "walking street" with restaurants, cafes, shops and a beer garden.

Chinese businesses are featured prominently at Vientiane New World, with regional Chinese restaurants offering cuisine from Liaoning and Shandong provinces, as well as Old Chengdu, a high-end Sichuanese restaurant where several dishes cost upward of US$100 - a month's rent for the average Vientiane resident.

Chinese expatriates and tourists are not the only diners to be found at these restaurants, however. For middle-class and wealthier Laotians, dining at a Chinese restaurant is a sign of sophistication and worldliness.

On weekend nights, Vientiane New World's beer garden is filled with young Laotians eating and drinking at dozens of tiny open-air bars and restaurants, typically constructed with corrugated metal. Offering a relatively upscale alternative to the night markets farther down the riverside, each establishment's music competes with that of the neighbours.

Camce's riverside investment is but one Chinese project transforming the city. Shanghai Wanfeng has invested US$300 million of a projected US$5 billion total in That Luang Lake, which has just begun its second of four phases that are scheduled for completion in 2032.

The project is in an economic zone, where foreign investors can buy condominiums.

Mr Saiyalath said he hoped the government would adopt a new law to allow foreigners to own condominiums outside of economic zones. In Cambodia, which has such a law, foreign money, especially Chinese, has flooded the property market. 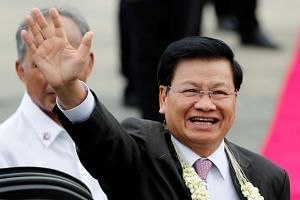 "Once this law is in place, foreigners will be more confident to invest here," he said.

"Look at Cambodia. Our country needs to be developed quickly."

China is prioritising Laos in its Belt and Road investment push. Last November, President Xi Jinping of China and his Laotian counterpart Bounnhang Vorachith oversaw the signing of a memorandum of understanding to deepen cooperation through a new Laos-China economic corridor.

"China sees Laos as providing a pathway for rail and road connectivity into Thailand and the rest of South-east Asia," said Mr Brian Eyler, director of the South-east Asia programme at the Stimson Centre, a non-partisan policy research centre in Washington.

Thailand's military leaders have dragged their feet on the rail line between Bangkok and Vientiane that they originally said would be completed in March. Thailand's transport ministry now projects the line to be completed by 2023, at the earliest.

"The fate of the rail connection from Vientiane to Bangkok is uncertain," Mr Eyler said, "which means China's big Belt and Rail push into South-east Asia could end inside of landlocked Laos."

Thailand is wary of getting too close to China, while the Laotian government has been keen to tap easy Chinese money, said Mr George McLeod, a consultant based in Bangkok.

"Thailand's low-end manufacturing sector has already been gutted by Chinese competition, and the leadership is acutely aware that closer ties would take a further toll on their economy," Mr McLeod said.

"Laos is even more susceptible to becoming an unequal partner - it has a tiny population of under seven million and lies directly on China's southern border with no buffer in between."