RAUB (Pahang) • Soaring demand for durians in China is being blamed for a new wave of deforestation in Malaysia, with environmentalists warning that vast areas of jungle are being cleared to make way for massive plantations of the spiky, pungent fruit.

Grown across tropical South-east Asia, the durian is hailed as the "king of fruits" by fans, who liken its creamy texture and intense aroma to blue cheese.

Detractors, however, say durians stink of sewage and stale vomit. The strong smell has led many hotels across the region to ban guests from taking them into rooms.

Nevertheless, they are a hit in China, and the increase in demand has prompted exporters to vie for a bigger share of the burgeoning market.

Growers in Malaysia are increasingly shifting from small orchards to industrial-scale operations - a trend that environmentalists warn presents a new threat to rainforests that are already challenged by loggers and oil palm plantations.

"Right now durians are gaining a lot of attention from the Chinese market," said Ms Sophine Tann, from environmental protection group Peka, which has studied land clearances to make way for the fruit. "This deforestation for planting of durians is in preparation to meet that demand."

In the jungle-clad district of Raub in the central Malaysian state of Pahang, swathes of rainforest have recently been chopped down to make way for a new plantation, with durian seedlings protected by netting planted across bare hillsides.

Right now durians are gaining a lot of attention from the Chinese market. This deforestation for planting of durians is in preparation to meet that demand.

MS SOPHINE TANN, from environmental protection group Peka, which has studied land clearances to make way for the fruit.

PAYING FOR THE BEST

Our customers aren't concerned about the prices. They just want the best.

MR WANG TAO, shop manager of the Little Fruit Captain stall in Beijing, on customers preferring durians from Malaysia to those from rival exporters, such as Thailand.

The plantation is next to a protected forest, which is home to a kaleidoscope of animals, from monkeys to exotic birds. A river, now murky and filled with trunks and branches from logging, runs nearby.

A sign outside the plantation says it is run by Ample Harvest Produce but company staff refused to comment when contacted about the loss of trees in the area.

Peka said the land's status was changed by the local government to allow logging, but the local authorities did not respond to requests for comment.

Meanwhile, in a Beijing mall some 4,000km away, a stall named Little Fruit Captain is doing a brisk trade selling Malaysian durians.

Shop manager Wang Tao said his customers "fall in love" with durians from Malaysia due to their particularly sweet taste, often preferring them to those from rival exporters, such as Thailand.

He imports frozen durians from a facility in Malaysia and sells them in plastic containers or in other forms - a kind of baked dessert, in ice cream or fried as crisps.

Customers are kept up to date about the shop's stock via the WeChat messaging app.

"I first tried durian as a child and acquired a taste for it," said university student Liu Zelun, who visits the shop once a week for her durian fix. "Thai durians have a stronger flavour and you tend to get sick of it after a while, but not the ones that I buy from here."

The most popular variety - and one of the most expensive - is Musang King, known for its thick, golden flesh. A single Musang King was on sale at the Beijing stall for 800 yuan (S$160), several times more expensive than in Malaysia. "Our customers aren't concerned about the prices. They just want the best," said Mr Wang. 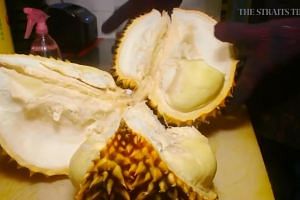 Durian dash: How investors are eyeing the world's most controversial fruit

Rare durian on sale in Indonesia for $1,343 each

With the price of key Malaysian export palm oil, used in everyday goods around the world from soap to margarine, in a seemingly inexorable decline, farmers are increasingly turning to durians.

The government has backed the expansion of the industry, hoping to cash in on growing demand from the world's second-biggest economy. The value of durian shipments from Malaysia to China in the first eight months of last year hit RM7.4 million (S$2.5 million), more than double the value in the same period of 2017, according to the agriculture ministry in Kuala Lumpur.

Malaysia hopes a deal struck in August to pave the way for the export of whole, frozen durians to China will boost shipments, and is aiming to more than double production to 443,000 tonnes by 2030.

Previously, Malaysian durians could be shipped to China only in pulp and paste form.

Despite the looming production boom, the agriculture ministry insisted plantations will expand slowly and said it was encouraging growers to use existing orchards and revive unproductive trees.

"Deforestation for new areas is not encouraged," Agriculture Minister Salahuddin Ayub told Agence France-Presse in a statement, adding that if trees were logged for plantations, strict environmental rules must be followed.

In Kelantan state, tribespeople last year set up blockades to stop a company from logging their ancestral lands to set up a Musang King plantation. The central government has taken up their cause, suing the state government for failing to uphold their land rights.

But environmentalists warn that the overall picture is bleak.

Durian cultivation is "driving yet more deforestation and biodiversity loss in Malaysia", said environmental group Rimba, saying it was leading to "destruction of critical habitat for wide-ranging animals such as tigers, elephants, primates, and hornbills".