China pressed Asean members to back a 10-point consensus statement summing up talks at a meeting on Tuesday, but this left the regional grouping split, The Straits Times has learnt.

At a special meeting of the two sides' foreign ministers in Kunming, the 10-member bloc had prepared a joint Asean statement expressing their "serious concerns" over recent developments to be read out at a joint press conference with the Chinese.

But at the last minute, the Chinese presented the Asean ministers instead with a 10-point consensus, which Asean could not accept.

It was then decided that Asean, which was to have been represented by Singapore's Foreign Minister Vivian Balakrishnan as co-chair of the meeting with Chinese Foreign Minister Wang Yi, would not attend any joint press briefing as it would be rude to disagree with the Chinese minister in public.

No pressure on any Asean member to retract joint statement: China

The grouping decided instead to issue its joint statement separately to the media. The statement registered "serious concerns over recent and ongoing developments, which have eroded trust and confidence, increased tensions and which may have the potential to undermine peace, security and stability in the South China Sea". It also called for the freedom of navigation and peaceful resolution of disputes in accordance with international law. 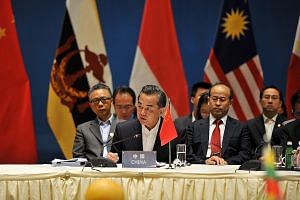 That, too, was scuttled by the Chinese, who lobbied its friends in the grouping to block the statement, it is understood.

With no consensus, the Asean states decided that they would issue their own statement as they saw fit. But in what has been described as a sign of frustration over the immense pressure that China had put on Asean, Malaysia's Foreign Ministry released the joint statement on Tuesday evening.

"Malaysia releasing it was a manifestation of the extreme frustration of the original five Asean members plus Vietnam at the particularly crude and arrogant behaviour of the Chinese," an Asean official said.

Malaysia retracted the statement hours later, leading to confusion over whether there was indeed such a statement. Observers, pointing to disunity in the grouping, called it a "diplomatic fiasco". •Additional reporting by Nirmal Ghosh