MANILA - China is guaranteeing "safe passage" for all nations using the South China Sea, and it is willing to work with Asean to maintain peace in this strategic waterway, President Rodrigo Duterte has said.

The two leaders met on the sidelines of the Asia-Pacific Economic Cooperation (Apec) summit in the Vietnamese resort city of Danang.

He said Mr Xi told him: "No, it's nothing… He assured us again, 'Don't worry, you have all the rights of safe passage."

"He knows that if he goes to war, everything will blow up. He acknowledged that war cannot be promoted by anybody, but it would only mean destruction for all of us," he said.

Mr Duterte said in a news briefing on Thursday (Nov 9) that, as Asean chair, he had to inform Mr Xi "that everybody is worried".

"The whole of Asean is worried about how we should behave in the seas that are now militarised, afraid that there might be a mistake, and there would be shooting," he said.

China claims almost the entire South China Sea through which about US$3 trillion worth of goods pass every year, building and militarising artificial islands.

Brunei, Malaysia, the Philippines, Taiwan and Vietnam also have overlapping claims there.

Mr Duterte said Mr Xi was "quite surprised about my coming in very strong". 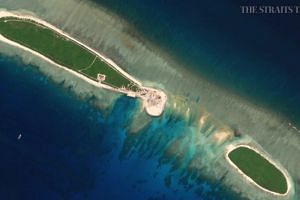 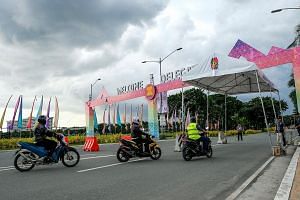 But he said he laid down his case "in a very nice way", and explained to his Chinese counterpart that he was not insisting on any claims of ownership of contested waters.

"We never talked about sovereignty. We talked (about) who's holding the cannons there, and who has the might to enforce it," he said.

Mr Duterte said he avoided raising a ruling last year (2016) by an international tribunal on a case filed by the Philippines that struck down China's claims over the South China Sea.

He insisted the ruling was a matter best left for the Philippines and China to discuss, but that it is "not the most opportune time to do it".

"The arbitration rendered by the international court does not mean anything to anybody except China, which does not want to follow, and us, (which) has to insist," he said.

The Philippines will, according to a consensus reached by both sides, work through bilateral channels to appropriately handle maritime issues, Xinhua cited Mr Duterte as saying. It did not elaborate.