JAKARTA (REUTERS) - A Canadian teacher is expected to return to a Jakarta prison on Friday (Feb 26), a family member said, a day after Indonesia's Supreme Court overturned his acquittal on charges of sexually abusing kindergarten children at an international school in the capital.

The case, which critics say was fraught with irregularities, has brought the country's justice system under scrutiny with Western nations raising concerns about legal certainty in South-east Asia's biggest economy.

"Along with others, we have made repeated calls to ensure this case is handled in a fair and transparent manner," said British Ambassador to Indonesia Moazzam Malik in a statement. 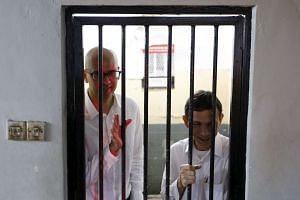 "Yesterday's development adds to serious questions about transparency and consistency in the rule of law in Indonesia."

The United States and Canada have also expressed similar concerns.

Canadian teacher Neil Bantleman and Indonesian teaching assistant Ferdinand Tjiong were convicted on charges of abusing kindergarten students at the Jakarta Intercultural School (JIS), where the children of many expatriates, diplomats, and wealthy Indonesians are enrolled.

The two were originally sentenced to 10 years in jail but were acquitted in August last year after nearly a year behind bars and released.

The Supreme Court on Thursday ordered that they be re-arrested and increased their sentences to 11 years.

"Neil returned to Jakarta late Thursday evening and is now with the prosecutor. He will likely return to prison on Friday,"said his brother Guy Bantleman.