TBOUNG KHMUM, CAMBODIA (AFP) - Cambodian premier Hun Sen threatened to dissolve the country's embattled opposition party on Monday (Sept 11), as the rival politicians protested outside a remote border prison where their leader is being held for alleged treason.

Last week's dramatic arrest of opposition leader Kem Sokha was the latest move in a years-long crackdown on the Cambodia National Rescue Party (CNRP), which poses the only real threat to Mr Hun Sen's 32-year grip on power in next year's national elections.

The 64-year-old politician was accused of conspiring in a "secret plan" with foreign entities that began in 1993, with Mr Hun Sen alleging that the US was involved in the plot.

On Monday, two dozen opposition politicians travelled to the prison where he was sent on the border of Vietnam to protest his arrest.

Back in the capital, Phnom Penh, Mr Hun Sen threatened to dissolve the party if they continued to "protect" their leader.

"If the political party continues to block (proceedings) and continues to protect the traitor, it means this party is also a traitor, so there is no need to keep this party in Cambodia's democratic process anymore," said the self-described strongman.

The legal punishment could be the "dissolution of the party", he added.

The opposition politicians made the three-hour trip to the prison in Tboung Khmum province on the same day lawmakers from Mr Hun Sen's ruling party voted to continue the proceedings against Kem Sokha. 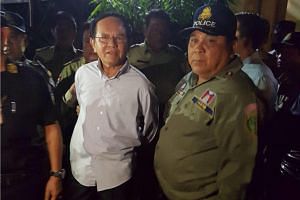 "We demand the release of president Kem Sokha immediately and unconditionally," said CNRP's deputy leader Mu Sochua, flanked by other MPs in front of a police blockade outside the jail.

Mr Mu Sochua also threatened to boycott the 2018 poll if the veteran politician was not released, saying the election would no longer be "free and fair".

Although Cambodia is nominally a democracy, Mr Hun Sen has ruled the impoverished nation for more than three decades, amassing extensive control over its judicial system, security forces and economy.

Rights groups say he has been systematically silencing his opponents - in politics, media and NGOs - ever since his party nearly lost to the CNRP in the last 2013 election.

The CNRP fared well in this year's local polls, buoyed by a wave of anger over the corruption, inequality and rights abuses that have flourished under Mr Hun Sen.

But the party's prospects are dimming with its top two leaders sidelined by the courts, with Kem Sokha's predecessor Sam Rainsy living in exile to avoid a string of convictions he says are politically-motivated.