PHNOM PENH (AFP) - An Australian film-maker jailed for espionage in Cambodia received a royal pardon and was released on Friday (Sept 21), less than a month after he was sentenced to six years in prison in a case observers slammed as a farce.

Mr James Ricketson, 69, was sentenced in late August following his arrest in June last year after he flew a drone over a rally held by the opposition Cambodia National Rescue Party (CNRP), which was effectively banned months later.

It added that the request for the pardon came from Prime Minister Hun Sen.

Mr Ricketson's lawyer Kong Sam Onn confirmed Mr Ricketson has been released and is now with his family.

His son Jesse said the family was "relieved and excited" to have Mr Ricketson back.

"It has been a really tough 16 months and I'm just kind of in shock now," Jesse said, expressing gratitude to Cambodian King Norodom Sihamoni for "bringing this nightmare to an end". 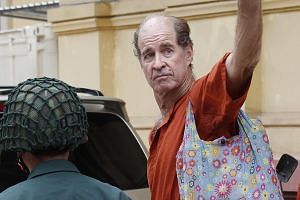 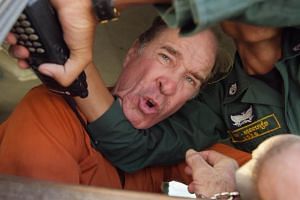 The six-day trial - which featured a surprise appearance by Hollywood director Peter Weir serving as a character witness for his friend - ended with the court convicting Mr Ricketson for "espionage and collecting harmful information that could affect national defence".

The prosecution had accused Mr Ricketson of working as a film-maker in Cambodia for years as a front for espionage but the verdict did not mention the country that he was allegedly spying for.

Mr Ricketson's release comes after a series of activists and opposition lawmakers were freed in the weeks following July's national election, which critics have said was neither free nor fair.

The CNRP was dissolved in the lead-up to the controversial polls, stamping out the only real competition faced by Mr Hun Sen's Cambodian People's Party and paving the way for all 125 Parliament seats to be filled by his lawmakers.

Following the vote Mr Hun Sen - who has been in power for more than three decades - returned to a pattern of easing up on dissent.