Indonesia's capital city was calm yesterday, after two days of riots over the presidential election results, but with police visibly guarding key government buildings and intersections.

The authorities have said the rioting was orchestrated by thugs paid to vandalise, attack officers and stir up tensions.

Many road blockades had been removed by yesterday, with motorists seen on the roads as cleaners picked up used plastic mineral water bottles and other garbage from the streets and pedestrian areas.

But road blockades remained outside the office of the election supervisory agency Bawaslu, the centre of the protest rallies. The smell of tear gas lingered in the air when The Straits Times visited the area early yesterday morning.

More than a hundred police officers were seen guarding the major thoroughfare, which is surrounded by a shopping centre, hotels and government offices.

MRT services resumed operations at 8.30am, serving all stations except the one near the Bawaslu headquarters.

Mr Harry Sukisman, owner of household goods shop Toko Jaya, which is 400m from Bawaslu, was serving customers as he reopened his shop after two days of closure.

Jakarta begins to return to normal after two days of violent protests against election results
Firefighters clean up area around Sabang police post, which was set on fire by rioters

"We could see this morning that the road in front of us got crowded again with cars, so we decided to reopen shop," the 68-year-old told The Straits Times.

Tensions rose in the city after the election commission declared on Tuesday that incumbent President Joko Widodo had defeated Mr Prabowo Subianto with a 55.5 per cent share of the votes, to his rival's 44.5 per cent, in the April 17 presidential election. 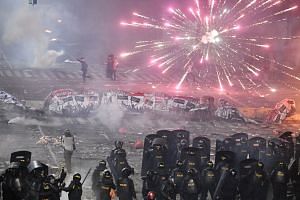 Mr Prabowo has rejected the result, alleging widespread fraud. He plans to file a legal challenge in the Constitutional Court by the deadline, which is today.

What started out as a peaceful rally to protest against the result turned violent on Tuesday evening outside Bawaslu, as new groups of people suddenly appeared and started attacking the riot police.

As of Wednesday night, 257 suspects had been arrested.

Among those to be prosecuted are two militants who are members of Garis, which had pledged allegiance to the Islamic State in Iraq and Syria extremist group, as well as sent its cadres to Syria to fight. Convicted terrorist Abu Bakar Bashir was a member of Garis' supervisory board.

A version of this article appeared in the print edition of The Straits Times on May 24, 2019, with the headline 'Calm returns to Jakarta after deadly riots'. Subscribe
Topics:
More
Whatsapp Linkedin FB Messenger Telegram Reddit WeChat Pinterest Print Purchase Article Copy permalink