KUALA LUMPUR • Umno Supreme Council member Nazri Aziz will personally push for the expulsion of Tan Sri Muhyiddin Yassin and Datuk Seri Mukhriz Mahathir from the party when the top body meets at the end of this month, asserting that their attacks on Malaysian Prime Minister Najib Razak can no longer be ignored.

"I want to initiate the process for them (Tan Sri Muhyiddin and Datuk Seri Mukhriz) to be thrown out of the party," he told the Malay Mail Online yesterday.

Datuk Seri Nazri highlighted the support of Mr Muhyiddin and Mr Mukhriz for a "citizens' declaration" led by former prime minister Mahathir Mohamad that called for Datuk Seri Najib's resignation - which he termed an insult - as grounds for their removal. 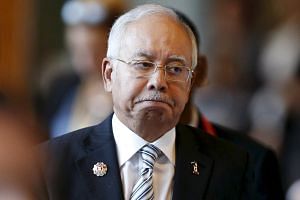 No easy task to dislodge Najib

The Padang Rengas MP said he would propose that the Umno Supreme Council sit as a disciplinary board and decide what action to take against the former deputy president and former Kedah menteri besar.

"There is no need for an emergency meeting. We are not in a hurry. Let us follow the due process. But I feel that the Supreme Council must sit as a disciplinary board as these two must be tried by their peers," Mr Nazri said.

However, Mr Nazri said that he would not push for the sacking of Datuk Seri Shafie Apdal from the party, even though he signed the declaration, because the Umno vice-president did not attend the "citizens' declaration" press conference last Friday.

Mr Najib said yesterday that Barisan Nasional remained strong even though some of its leaders chose to work with the opposition, reported The Star.

Without naming anyone, he said that these leaders might have forgotten the principles and struggles of the ruling coalition. "But yesterday, I could see that the unity and loyalty among the Barisan parliamentarians remain strong," he said yesterday, referring to a pre-council meeting held at Seri Perdana ahead of the Dewan Rakyat sitting.

"God willing, we will continue to carry out our responsibilities entrusted by the people," he wrote on his official Facebook account.

Deputy Prime Minister Ahmad Zahid Hamidi has said the onslaught for calls for Mr Najib's resignation not only threatens the Prime Minister, but also the entire Barisan Nasional ruling coalition.

"The opposition is excited to go against the highest leadership in BN and Umno, which forms the government, not only (against) an individual. If this is threatened, the entire BN and Umno at all levels are threatened," Datuk Seri Zahid said, after launching Perak Umno's annual general meeting in Ipoh yesterday, reported The Malaysian Insider.

He said that unity was important and that any difference in opinions should be voiced through internal channels, referring to the support given by some members of Umno to the calls for Mr Najib to be ousted.

"Don't open the floodgates, it will not be good for our political mould and ecosystem, which is different from other countries," he said.

A version of this article appeared in the print edition of The Straits Times on March 07, 2016, with the headline 'Call to expel Muhyiddin and Mukhriz from Umno'. Subscribe
Topics:
More
Whatsapp Linkedin FB Messenger Telegram Reddit WeChat Pinterest Print Purchase Article Copy permalink