HANOI (REUTERS) - Prime Minister David Cameron pushed to step up trade with Vietnam on Wednesday to capitalise on "enormous" opportunities for British firms in an economy Britain would support with £500 million (S$1 billion) in infrastructure loans.

Making his fourth stop on a tour through South-east Asia, Cameron met Vietnamese counterpart Nguyen Tan Dung in Hanoi and presided over the signing of several deals between firms of both countries in infrastructure, engineering, insurance and energy.

A British business delegation has joined Cameron on his trip to Indonesia, Malaysia, Singapore and Vietnam, his first venture outside Europe since winning re-election in May.

He is seeking to expand British trade relationships beyond Europe, parts of which remain stuck in an economic rut.

"Our trade with Vietnam accounts for just 0.5 per cent of the UK's total global trade and I think that indicates the enormous opportunity that there is," Cameron told a news conference.

"We want to go much, much further... we believe there's much more to come." 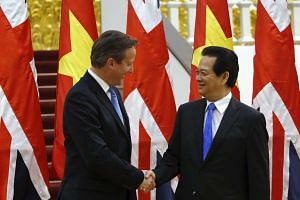 Vietnam's US$184 billion (S$250 billion) economy is one-fifteenth the size of Britain's but growing at 6.28 per cent, one of Asia's fastest rates.

Britain is the third-biggest European Union investor in Vietnam at US$2.7 billion, with Rolls-Royce, Standard Chartered and Marks and Spencer among British firms operating in the communist but pro-business country.

Bilateral trade has doubled in the past three years and reached US$2.5 billion in the first half of 2015, mostly exports of textiles, footwear and mobile phones to Britain, according to Vietnamese government data.

Vietnam is pushing through a series of economic reforms, attracting foreign companies like Intel, Samsung and LG to its manufacturing sector, buoyed by its pursuit of numerous multilateral free trade agreements slashing export tariffs to major markets.

They include an FTA with the EU, which Dung said would "open up great opportunities" for firms from Britain and Vietnam.

Among agreements reached on Wednesday were the issue of a £100 million sovereign bond by Vietnam's Finance Ministry to Prudential, and a contract for Rolls-Royce to provide service and maintenance to Vietnam Airlines.

Rolls-Royce said in a statement that the value of the contract was US$580 million. During the news conference, Dung had put the value at US$1.4 billion over a 20-year period.

In a veiled reference to the assertiveness of neighbour China in the South China Sea, Dung said he and Cameron "share deep concern" over recent developments that threaten security and freedom of navigation, "particularly the large-scale land reclamation activities".