YANGON (REUTERS) - A Reuters reporter on trial in Myanmar had his head covered with a black hood, was deprived of sleep and forced to kneel for hours at a secret police interrogation site after he was arrested with a colleague last year, he told a court on Tuesday (July 24).

Kyaw Soe Oo, one of two Reuters journalists accused of obtaining state secrets, said the interrogators focused on a story the reporters had been working on about the murder by soldiers of 10 Rohingya Muslims, showing no interest in the documents they are accused of obtaining.

During two weeks of questioning by officers from military intelligence and police special branch, the reporters were denied access to their families and lawyers, Kyaw Soe Oo told Judge Ye Lwin, overseeing proceedings at the court in Yangon.

The 28-year-old reporter and his colleague Wa Lone, 32, face charges brought under the colonial-era Official Secrets Act, in a case seen as a test of press freedom in Myanmar. Both have pleaded not guilty. If convicted, they could be sentenced to up to 14 years in prison.

The reporters say the documents were planted on them by a police officer during a meeting at a restaurant on the outskirts of Yangon on Dec 12. Defence lawyers have said the evidence put forward by the prosecution shows the police entrapped the journalists to interfere with their reporting.

In his testimony, Kyaw Soe Oo said they were arrested immediately after leaving the restaurant and taken to a nearby police station, before being driven to a special police interrogation site in northern Yangon called Aung Tha Pyay.

"They put black hoods on us outside the Htaunt Kyant police station and we stayed hooded until we arrived at Aung Tha Pyay,"said Kyaw Soe Oo. 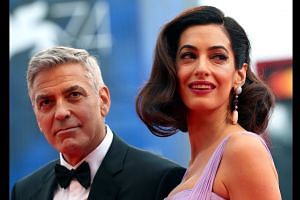 "There were around 10 interrogation officers who took turns interrogating me. They didn't let us rest and asked questions for three days straight while I was in handcuffs."

Speaking to reporters after the hearing, defence lawyer Than Zaw Aung likened such treatment to how Myanmar's former military rulers used to interrogate political opponents.

"Asking questions repeatedly for three days without letting them sleep made them mentally weak. This kind of mental and physical torture is a human rights' violation," said Mr Than Zaw Aung.

Mr Zaw Htay also said Myanmar's courts were independent and the case would be conducted according to the law.

Captain Myint Lwin, the officer in charge of the Htaunt Kyant police station, denied that the reporters were deprived of sleep or made to kneel when he testified to the court in June, saying officers were not allowed to "do such a thing".

Kyaw Soe Oo testified throughout the day, before Judge Ye Lwin adjourned the proceedings. The trial will resume on Monday (July 30).

At the time of their arrest, Wa Lone and Kyaw Soe Oo had been working on an investigation into the killing of 10 Rohingya Muslim men and boys in the village of Inn Din in western Myanmar's Rakhine State.

The killings took place during a military crackdown that United Nations officials have said constituted ethnic cleansing. More than 700,000 Rohingya fled to neighbouring Bangladesh since August last year, according to UN agencies. Myanmar rejects almost all accusations of wrongdoing and says its armed forces launched a legitimate counter-insurgency operation after coming under attack by Rohingya militants.

Kyaw Soe Oo, who comes from the violence-torn Rakhine region and is a member of the Rakhine ethnic group, said the non-stop questioning ceased only after the police found photographs of the 10 men from Inn Din on the journalists' phones.

Then, one of the interrogators burst into Kyaw Soe Oo's cell and asked angrily: "Why haven't you told us about this?" referring to the picture of the 10 kneeling men tied together, taken shortly before they were killed last September.

At one point, a military intelligence officer brought print-outs of the Inn Din photographs and asked Kyaw Soe Oo whether he had "sent the photos from my phone to human rights organisations from foreign countries".

Kyaw Soe Oo denied sending the photographs to anyone and told the officer: "I'm a reporter and I follow journalistic ethics."