MANILA - Beijing on Thursday (Aug 8) vowed to crack down on gangs setting up online casinos in the Philippines to lure Chinese players and launder money out of the mainland.

A statement from the Chinese embassy in Manila said China would "carry out more special operations" to "destroy networks of criminal organisations" running offshore gaming operations in the Philippines.

Both online and offline gambling are illegal in China.

The embassy said a huge number of Chinese from the mainland had been illegally recruited to work for these syndicates in the Philippines under conditions it described as "slavery".

"Their passports are taken away or confiscated by the Philippine employers. They are confined to live and work in certain designated places and some of them have been subjected to extortion, physical abuse and torture as well as other ill-treatments," said the embassy.

The Philippines is being transformed by a massive surge in online gambling companies catering to players in China. The demand is expected to drive up gambling revenue to US$4.1 billion (S$5.7 billion) this year, from just over US$1 billion in 2016.

The annual licensing fees totalled US$140 million last year, more than 11 times the 2016 total. Licensing fees are now the third-largest source of government revenue, behind taxes and customs duties.

By some estimates, at least 100,000 Chinese nationals, many of them undocumented, have moved to Manila to work for gambling companies as marketing agents, tech support specialists and engineers - all to serve the Mandarin-speaking clientele.

The Chinese embassy said gangs in China have been exploiting this burgeoning offshore gaming industry to launder "hundreds of millions of yuan", in part by buying real estate.

China's growing footprint in the Philippines has led to spiralling property prices.

In the prime Manila Bay area, where most online casinos operate, home prices surged by a record 27 per cent in the last quarter of 2017.

Chinese buyers made up almost 30 per cent of residential reservation sales during that period at SM Prime, the country's largest property developer. The proportion of mainland nationals who bought homes from Ayala Land jumped to almost half of all sales to foreign buyers.

The embassy said the offshore gaming industry in the Philippines had also led to a surge in "crimes and social problems" in China that had "caused huge losses to the victims and their families". 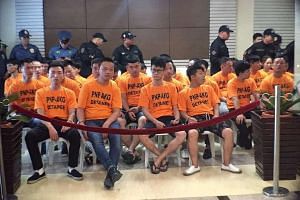 In the Philippines, police are seeing a spike in the number of cases involving loan sharks abducting Chinese gamblers whom they managed to lure into debt traps.

Twenty-three Chinese nationals - all linked to gambling debts - were kidnapped last year, according to official reports. So far this year, police have rescued at least a dozen Chinese nationals.

Anti-crime advocates said the actual figure could be five times higher, as most victims would rather head back to China after being rescued than pursue a case in the Philippines.

Disputes among Chinese migrants in the Philippines, meanwhile, had resulted in more than just scuffles.

In November last year, police recovered the chopped-up body of a Chinese woman at a condominium in the financial district of Makati, in what investigators believe is a case of a romantic feud gone awry. Four Chinese suspects were arrested.

On Wednesday, a senior Philippine official of the state-run gaming firm said the government backed plans to build "self-contained hubs" where Chinese offshore gaming operations and their workers could all be relocated.

He said this would make it easier for law enforcers to keep tabs on Chinese nationals for their own security.

Two such hubs are already being built in the north and south of Manila by the Oriental Group, an offshore gaming operator. These could house some 25,000 Chinese workers.

"Given social tensions, we wanted to put everyone in one place," Oriental's general manager Kevin Wong told Bloomberg.

But the Chinese embassy said this could "infringe on the basic legal rights of the Chinese citizens concerned".