He noted that the international and regional situation is complex and changing. Given this context, cooperation between Asean and China is "built on a stable structure and moving forward in a positive fashion", Mr Li said.

"We have strengthened political mutual trust. We both support stability in the region," he told leaders at the Asean-China Summit in Thailand. "And by doing so, we have been able to cope with the instability in other parts of the world."

Mr Li also highlighted progress made on drawing up a code of conduct for the South China Sea, which has been the subject of competing territorial claims.

The first reading of the Single Draft Negotiating Text for the Code of Conduct (COC) was completed earlier this year - a "very important landmark" for countries involved, he added.

"We stand ready to work with Asean countries, building on the existing foundation and basis, to strive for new progress in the COC, according to the three-year timeframe, so as to maintain and uphold long-term peace in the South China Sea," Mr Li said.

Prime Minister Lee Hsien Loong, who also spoke at the summit, welcomed the latest developments on the COC.

He urged negotiators to continue making progress "in the spirit of collaboration and good faith in subsequent readings, as we deal with the more complex and difficult issues".

Singapore will work towards establishing a code of conduct that is in accordance with international law, he added. 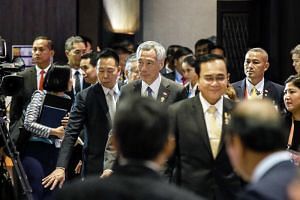 Near mishaps with Chinese navy worry US fleet chief

The Prime Minister also welcomed China's proposal to conclude the COC in three years. "But it is even more important to get the outcomes right, and to have an effective and substantive COC," he said.

Among other things, he said it is imperative that the Asean-China Free Trade Area Upgrade Protocol be fully implemented.

He added that both parties can also strengthen connectivity through efforts such as working towards fully liberalising the Asean-China Air Transport Agreement.

At the summit, leaders adopted statements to synergise the Master Plan on Asean Connectivity 2025 with China's Belt and Road Initiative, strengthen media cooperation, as well as to cooperate on smart city projects.

PM Lee urged leaders to identify and pursue fresh areas for collaboration, holding up smart cities as one such area.

"City-to-city collaboration through the Asean Smart Cities Network will further integrate our economies and unlock the potential of the digital economy," he said.

In his speech, Mr Li noted that ties have deepened between people on both sides.

"We are each other's major tourist destinations," he said. "And we can expect even more booming people-to-people exchanges in the coming years."