HUE, Vietnam (AFP) - By day Nguyen Thi Hoa sold conical hats on the streets of Hue in southern Vietnam, at night she funnelled secrets to Communist army handlers who were poised to launch an audacious assault on the city that would reshape the Vietnam War.

Hoa was part of the Perfume River squad, a top secret female combat unit formed in 1967 and bound by the communist propaganda slogan: "When the enemy comes to your home, even the women should fight".

Deployed deep in enemy territory, the covert 11-strong unit played an instrumental role in the 1968 'Tet Offensive' despite most of them being in their teens.

The offensive, whose 50th anniversary will be marked on Jan 31 with an official ceremony in Ho Chi Minh City, was a military failure for the northern forces.

But it swung US public opinion decisively away from the anti-communist fight, ultimately leading to the American pullout.

Women were integral to the communist North's battle against American "foreign invaders", working mainly in non-combat roles for most of the war as spies and guides, cooks and messengers, mules and nurses for the injured.

Using her cover as a street trader, Hoa gleaned details on enemy movements in the strategically important imperial city of Hue, feeding information to commanders from the north.

It was a role driven by conviction in the communist cause.

"I wanted to liberate myself, liberate my homeland, and liberate other women... there was no other path besides joining the revolution," she told AFP in Hue where she settled after the war.

She was just 17 when she joined the war effort as a spy and secret messenger in 1965.

Two years later she joined the Perfume River unit, named after the waterway that intersects Hue city, a role so risky she didn't even tell her family.

War came to Hue, then the third largest city in Vietnam, in the early hours of January 31, 1968.

It was a key target of the Tet Offensive - a series of surprise attacks across southern Vietnam by more than 80,000 North Vietnamese and Viet Cong fighters.

The attacks, which also hit Saigon, stunned US troops and their south Vietnam allies.

Casualties were massive for both sides, especially the North which lost an estimated 58,000 people.

The shock assault on Hue saw the citadel swiftly fall to the North and for days a blue and red flag with a bright yellow star - a symbol of communist Hanoi and its allies - flew proudly over the city.

But US marines and southern troops countered, taking 26 days to wrest back the city block-by-block in a battle that would become the longest and one of the bloodiest of the Vietnam War. 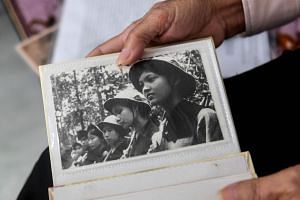 With casualties high, the Perfume River Unit was called on to join the fight. Until then they had mostly been ferrying injured fighters from the frontline.

The women dug in around markets and the sports stadium.

Hurling grenades and shooting her AK-47, Hoa says it was a battle for survival.

"We just kept shooting... if we didn't shoot, they would have shot us, so we just kept fighting," said Hoa, 69, who was doused in Agent Orange during the war and later gave birth to a disabled son.

The use of female fighters "shows how desperate they (the North) were," said Mark Bowden, author of "Hue 1968".

"Every hand was thrown into the fight and at that point these young women fought," he told AFP.

Their efforts were recognised in a poem by Hanoi's revolutionary leader Ho Chi Minh, who died in 1969 before the war's end, praising them for having "crushed the bones" of American soldiers and crystallising their heroism which is still celebrated today.

"When we received that letter, everyone cried," fellow Perfume River Unit fighter Hoang Thi No, 68, told AFP at her home in Hue, sitting under a commemorative plate of 'Uncle Ho'.

"We didn't expect it, we were just a small unit, and so many people died." .

'Revenge for our sisters'

The nod from Uncle Ho came too late for four members of the unit who perished during the battle for Hue.

"My comrades died... and our anger mounted, as did our determination to fight to get revenge for our sisters," the soft-spoken grandmother told AFP.

Two more died later in the war - but five are still alive.

No and Hoa regularly visit the cemetery where some of their fallen comrades are buried on the outskirts of Hue, a city transformed from a pile of rubble 50 years ago to a tourist hotspot today.

Although they weren't the only women to take up arms in the Vietnam War, their reputation as fierce fighters inspired others to join the war - both as soldiers and behind the frontlines.

"The Perfume River Unit... were a source of motivation for liberation soldiers and other women to join the war effort," according to Cao Huy Hung, director of the Revolutionary Museum in Hue.

"If soldiers didn't get support from women, I don't think we could have held out in Hue for 26 days, maybe just a week maximum."