The founder of a Batam-based radio station accused of broadcasting extremist views says it has taken steps to keep itself in check, but the authorities say they will still investigate the matter.

Indonesia's Broadcasting Commission (KPI) said it will investigate Radio HangFM for possibly spreading radical teachings, after Singapore's Ministry of Home Affairs (MHA) said last week that it had detained two Singaporeans who claimed to have been radicalised by the station's ultra-conservative broadcasts.

Radio HangFM had faced a protest in late 2013 by a group of Muslims who were disturbed by the station's extreme religious sermons.

Its founder Mr Zein Alatas, 59, told The Straits Times on Monday that the station has changed its programming content and banned controversial hardline clerics following the protest.

The station's preachers had disapproved of local traditions such as praying over the graves of dead relatives and holding days-long prayers during funerals, which they said were not the ways of Prophet Muhammad, he said.

Mr Zein had apologised to the protesters and signed an agreement promising to review its programmes and tone down its rhetoric. 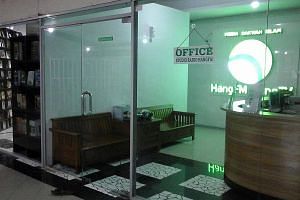 "Our clerics were warned to stop saying that this or that ritual is not from the Quran and hadiths," he said, referring to religious reports on the Prophet's life. "To us, the case is closed."

The station had also dropped some speakers such as Singaporean preacher Rasul Dahri, whom The Straits Times understands was jailed and fined in Johor Baru in May for teaching without a permit and spreading messages that were in conflict with Islamic doctrine.

Last week, Singapore's MHA said that the station "sometimes features speakers who preach extreme views", and the authorities are "looking into all options" on whether to block it.

But Mr Zein said the authorities "cannot judge us now for past incidents, and for which we had taken steps to rectify", insisting that the two Singaporeans might have consumed radical materials from other sources.

"Like all Muslims, I condemn radicalism, terrorism and ISIS," he added, referring to the Islamic State in Iraq and Syria (ISIS) terror group.

He said that the station has also invited several clerics approved by the government to give anti-terrorism talks.

Radio HangFM is one of nine religion-based stations in the Riau Islands province, and one of hundreds across Indonesia.

It had played Malay music in its early days in 2002 but became an Islamic radio station in 2005 after Mr Zein felt that he "was busy chasing worldly pursuits that I strayed away from God", he said.

The station generates a steady stream of income on its own and does not receive any foreign funding, including from the Middle East, he said.

KPI's Riau Islands provincial chief Azwardi Anas acknowledged to The Straits Times on Monday that the station had "changed a lot" in the past three years, airing the national anthem, running poetry and even inviting clerics recommended by the authorities to speak, besides its own.

But national KPI chief Yuliandre Darwis said the commission is waiting for a detailed report from the province on the station.

"The initial report by the local authorities is it is purely a religious station. But if violations are committed, we will surely intervene," he told The Straits Times yesterday.

"We can ask it to stop its broadcasts, issue a verbal or written warning, axe its programmes or revoke its radio licence. But all this will only be done based on checks on the ground."