He clarifies radical cleric must, as with all reformed terrorists, pledge allegiance to Indonesia, Pancasila

President Joko Widodo has clarified that radical cleric Abu Bakar Bashir would only be released from prison if he pledged allegiance to the Republic of Indonesia and the state ideology Pancasila, as is required of all reformed terrorists.

"This is a conditional release, not a pure release, so all the requirements have to be met. It is not possible for me to breach the regulations," Mr Joko told reporters at the presidential palace yesterday.

Mr Joko's legal adviser on his presidential campaign had said that day that Bashir would be given an unconditional release this week.

JI was responsible for the 2002 Bali bombings, Indonesia's deadliest terrorist attack in which 202 people were killed, 88 of them Australian.

The decision to release Bashir had drawn strong criticism both domestically and internationally - especially from Australian Prime Minister Scott Morrison - with Bashir still seen as a threat.

This latest clarification, and the government's announcement on Monday that the release decision would be reviewed, appears to backtrack on the controversial plan to free the cleric. 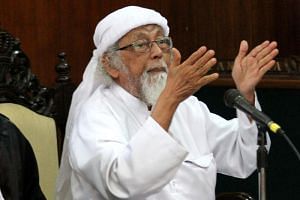 Freeing of Bashir seen as political move by Jokowi

Bashir was the alleged mastermind of the 2002 Bali bombings, although he was never convicted for the terrorist incident.

He has been in jail since his arrest in 2009, and was in 2011 sentenced to 15 years' imprisonment for funding a terrorist training camp in Indonesia's westernmost province of Aceh.

Vice-President Jusuf Kalla separately told reporters yesterday that the government's review would cover legal aspects of the release and would be carried out independently, not taking into account views from other countries.

"We do not take into consideration either objections or support from other nations. It's the same with Australia when Indonesia protested against them recognising West Jerusalem (as Israel's capital)... They went ahead and recognised it," Mr Kalla said.

Mr Kalla also noted that if Bashir dies in prison, it could create misunderstandings, but did not elaborate.

"We have been consistent always... about our concerns about Abu Bakar Bashir and that he should serve what the Indonesian justice system has delivered to him as his sentence," he told News Corp Australia."We have been very clear about the need to ensure that as part of our joint counter-terrorism efforts... that Abu Bakar Bashir would not be in any position or in any way able to influence or incite anything," said Mr Morrison.

Critics of the President claim the decision to release Bashir was politically motivated and connected to the presidential poll in April.

Mr Joko, who is running for his second and final term in office, has faced accusations of being anti-Islam and a communist, and Bashir's release is seen by some as a move to boost Mr Joko's Islamic credentials.