BANGKOK (BLOOMBERG) - Two things Thailand is famous for are its delicious street food and its wonderful beaches. Sadly, the first typically comes in plastic bags that often wash up on the second - not good for a country that relies on tourism for a fifth of its revenue.

Thailand's love of plastic bags helped make it the sixth-worst maritime polluter. The country generates more than 5,000 tonnes of plastic trash a day, three-quarters of which ends up in landfills. So the Thai government decided to clamp down, promising to eliminate all single-use plastic bags by 2021, ban plastic straws by 2022 and recycle all its remaining plastic packaging by 2027.

Big retailers like CP All Pcl's 7-Eleven, signed up early to the plan, pledging to stop handing out plastic bags starting Jan 1 this year, but for the ubiquitous street vendors, the change is not so simple.

"There's no alternative to plastic for hot soup," Ms Penjawan Pongkanmoon, a vendor of pot-stewed duck on Yaowarat Road in Bangkok, said on Jan 10. "I'm not for using plastic but I can't see another way."

About one-fifth of her clients order food to take away and she puts the hot stewed duck soup in a plastic bag and then puts it in another bag with handles. The rice she puts in a compostable container made from bagasse, a product of sugar cane, even though it costs more than plastic bags.

Hundreds of other vendors that line the main street in Chinatown have plastic bags hung full of noodle soup, pad thai and a myriad of other dishes and desserts, ready to be doled out to customers.

While the government told businesses to stop handing out plastic bags, it has not yet enforced the move with policing or penalties. Officials are studying laws from countries such as Kenya, Mexico and Britain, to review whether hefty penalties, added fees or other measures are most effective, said Mr Varawut Silpa-archa, minister of natural resources and environment. A full ban could start next year.

"There's a new sentiment now of feeling ashamed for using plastic," he said in a telephone interview. "The goal is to reduce amount of trash in Thailand, not just plastic bags but also styrofoam and plastic straws and cups."

Concern about the effect of the waste was fuelled by the death in August of Mariam, a baby dugong who had washed up on the Thai coast and became an Internet sensation as vets tried to care for her. After she died, they found pieces of plastic waste blocking her intestines. Public concern increased with the discovery of microplastics in local mackerel. 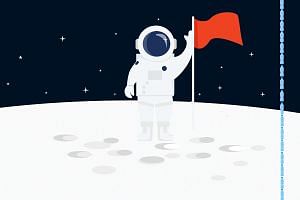 Singapore’s plastic problem: Where would your PET bottles take you?

While the government's timeline may be optimistic, the change in sentiment has prompted entrepreneurs and plastics producers to come up with solutions.

"We've been working to promote this movement for several years, but only just started noticing a big change," said Mr Weerachat Kittirattanapaiboon, chief executive officer of Bangkok-based Biodegradable Packaging for Environment Co, which makes microwavable food containers from bagasse that decompose within 45 days.

The company has grown in 10 years from making 10,000 pieces a day to two million, with clients in 31 other countries, including the United States and Japan. It plans to produce 10 million pieces daily within five years.

Mr Weerachat was a medical doctor when he came up with using the waste product from sugar cane. "Health and environmental issues are one and the same. Bad environment is bad for health," he said.

Sugar-cane waste isn't the only agricultural byproduct joining its food counterpart in restaurants.

Fallen leaves in palm estates that are usually discarded are turned into about 70,000 plates per month. This year, the company plans to triple output to meet demand, with more products, such as straws, cups and food boxes.

"Changing mindsets and habits will take some time, but people are becoming more aware now," he said. "'They're starting to accept higher product costs as the price for saving the environment."

With plastic straws the next target, Mr Vatistam Pruangviriya is selling reusable straws made from a small-diameter bamboo stems. Customers so far mostly include tourist businesses such as a dive resort and an elephant foundation, with many giving or selling them as souvenirs. But as the ban increases, he plans to expand sales to local coffee shops.

"These products are more than just utensils. They're a statement showing that you care about the environment," said Mr Vatistam, director of Success Connection Co. "It'll be a shock to the system for many people when the plastic ban is in force, but eventually everyone will get used to it."