The city has been blanketed in a murky haze for weeks, inciting criticism from the public over the government's response, which has veered from playing down the problem to abruptly shutting schools.

The authorities have seeded clouds to stimulate rain, sprayed overpasses with water to catch micro-pollutants, and even urged people not to burn incense ahead of Chinese New Year.

Troops have also been asked to inspect factories across the country.

Drones dispersed water yesterday to help clear the air of the harmful microscopic particles known as PM2.5 - a tactic that drew scepticism and derision from Thai social media users.

Bangkok governor Aswin Kwanmuang compounded the sense of frustration by calling on "all sectors" to find a solution.

"I don't know everything, so I'm inviting everyone to help," he said, in response to questions from reporters about the effectiveness of the drones. "If we do nothing, people will criticise us for not taking any action."

His plea comes a day after he declared Bangkok a "control area", closing hundreds of schools until today and announcing a ban on cars that use diesel and burning of any kind within the city. 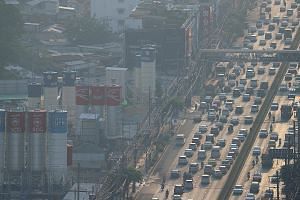 Violators run the risk of three-month jail sentences and fines.

The lingering pall is due to exhaust fumes from traffic, the burning of dead crops, and pollution from factories getting trapped in the city.

Prime Minister Prayut Chan-o-cha on Wednesday stepped up rhetoric, appealing to Bangkok residents to carpool and for the army to "check" factories in all 76 provinces.

She said a short-term solution would be to shut down the most severe factory polluters, but that ultimately "factories will have to convert to cleaner technology and open burning of waste must be stopped".

The authorities remain tense over growing gripes about the haze and the government's risible response, which has started to cloud political debate and worry officials about its impact on tourism during the high season.